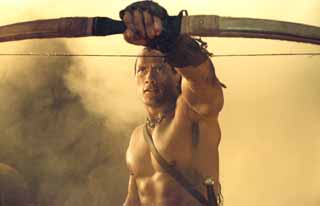 It's entirely appropriate that professional wrestler the Rock (né Dwayne Johnson) should have staked his claim to The Mummy franchise and this, its first spinoff. With his oddly chiseled mug and penchant for the occasional Spock-esque arched eyebrow -- not to mention a physique that's straight out of the Steve Reeves school of beefy hardbodies -- he's already a cartoon, and a fairly amusing one at that. For all the swords 'n' sandals hoodoo that makes up the wilting backbone of Jonathan Hale's script, the Rock is, nevertheless, fun to keep an eye on. I kept waiting for the moment that he'd bust out of that constricting fourth wall and begin chatting up the audience -- “Can you believe this nonsense?” he'd say with a sly wink and an easygoing grin -- but it never came. For a movie as unabashedly silly as The Scorpion King, everyone seems to be taking things a mite too seriously. Genre director Russell (who helmed the underrated The Blob remake, as well as the third installment in the Nightmare on Elm Street series and Jim Carrey's breakout vehicle The Mask) doesn't seem to have a clear idea of what he's doing here. The action sequences, of which there are many, are muddled and chaotic; you never know just whose foot is going in whose backside, and some of the CGI work is downright awful. But it's more than that: The Scorpion King clearly aspires to be a sort of Conan the Barbarian lite, but fans of that hamstrung franchise will recall that we've already been dealt a mortal blow in the abysmal Conan the Destroyer and its hobbled semi-sequel Red Sonja. No need to pick up that gauntlet ever again, thanks. And, of course, Russell's film is so far from the meat-and-potatoes fun of Robert E. Howard's Cross Plains conqueror that it's existing in a sort of Bizarro world of its own. It's just one big mess, all body blows and groan-inducing one-liners of the sort even Arnold Schwarzenegger is studiously avoiding these days. The Rock plays Mathayus, one of the last of a tribe of assassins called the Akkadians, the rest of whom have been wiped out by the evil warlord Memnon (Brand, putting his British accent to good, wily use), who is guaranteed success in battle thanks to the precognitive abilities of his sorceress Cassandra (Hu). With a band of brigands at his side (including Grant Heslov's woefully unfunny sidekick character), Mathayus sets off to slay the witch and save the day, and I don't think it's going to give anything away to say he succeeds after much tedious travail. Duncan (The Green Mile) is onboard as Mathayus' hulking ally Balthazar, and there are numerous scantily clad Amazons leaping about, but the single strongest feeling the film engenders is one of confusion: What the hell is going on, and why on earth should we care? The answer is no reason, in particular. Cry havoc and let slip the dogs of cheese, indeed. 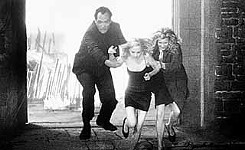 Bless the Child
They say the devil's in the details; if that's the case, then Bless the Child ought to be endorsed by the Christian Family Council as ... 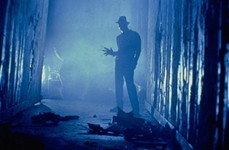 A Nightmare on Elm Street 3: The Dream Warriors
...