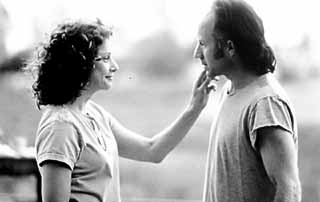 Another drunken wannabe writer watching his life skid out of control while he drifts through midday reveries and pines for his lost love … Haven't we seen this one before? Yes and no. The alcoholic artist character was a cliché when director Howard was still a pup, but Big Bad Love -- adapted from the stories of Mississippi author Larry Brown -- manages to be both sweetly affecting and borderline schizophrenic in the ways it digs into that hoary goldmine for a fresh load of pathos and cheap rotgut. One glance at the cast should be enough of a recommendation for any film lover -- it's Winger's first time on the screen in seven years, and Howard deserves a nod or two if only for getting his wife back in front of the camera where she so clearly belongs. But finally it's the film's languid, woozy feel that draws you in and keeps you there, stuck like a moth in a killing jar redolent of Old Grandad. Howard has the face for the part, times 10; as besotted and unpublished writer Leon Barlow, he stumbles through the film like a man with a serious internal injury. His face, all receding hairline and five o'clock shadow and wounded basset eyes, betrays an inner sensitivity masked by a lifetime of screwups. You can tell there's something major going on in there, though, even when Howard doesn't resort to the occasionally whimsical, often bizarre daydreams that pepper Leon's stumblebum existence. Wheels are turning, and they fire Leon's creative streak, nail him to his battered and badgered Underwood typewriter. When he's not passed out in the bathtub of his ramshackle house, he's painting houses with buddy Monroe (Le Mat, his cherubic Melvin and Howard face finally beginning to look more Howard, less Melvin) or shooting the breeze at the local watering hole. Leon's still mad for his ex-wife Marilyn (Winger), and it's plain to see why: Despite all the restraining orders and broken promises, she still radiates enough affection for this broken-down clown to give him a smile and a nod every now and then. She's the mother of their two little children, and he's the dad as chaos theory; whatever he can do wrong, he will do wrong. And still, as Howard's film progresses along its drowsy path, it's impossible not to fall for Leon, the would've been, could've been, should've been guy. His passion is alarmingly real, his life shockingly sidetracked, and his love for his shattered family and surroundings undimmed by the case after case of cut-rate beer. Even Angie Dickinson's creaky Southern matriarch can't tone down his crazed lust for life. Howard has wisely retrofitted this garish, summery blowout against a backdrop of preternaturally badass blues tunes, roping in everyone from the great R.L. Burnside to T-Model Ford as well as perennial out-of-bounders like Tom Waits and Tom Verlaine, and the film wears its soundtrack like a pair of dusty brown work boots. Like Leon, it clomps and stomps all over the place, but it's got a good beat and you can dance to it, if you're not too smashed.