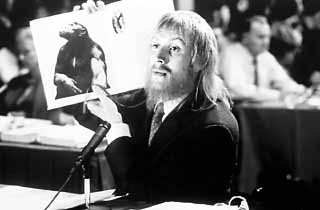 The old nature-vs.-nurture argument takes a beating in this smart absurdist comedy written by Being John Malkovich's Charlie Kaufman and produced by that film's director, Spike Jonze. This feature debut by French video director Gondry is a goofy and winning thing of sheer lunatic beauty, and although it never quite jells as well as Malkovich, it's still the brainiest, funniest thing out there. Arquette plays Lila, a woman born with a genetic trait that has caused her to grow a full body covering of sleek, blond fur. With her self-esteem understandably low, she leaves society behind and moves to the forest, where she immediately discovers an emotional sense of well-being that was so sorely lacking in polite society, and where she also pens a series of ecological treatises that win her fame among the non-naked apes back home. Eventually, however, she returns from the wild in search of a mate and hooks up with Tim Robbins' Nathan, a research scientist so conditioned by his chilly parents (Forster and Place) to conform to the niceties of civilization that his current project involves teaching table manners to little white mice (complete with miniature place settings). Together the two find a sort of happiness -- she keeps her overabundance of body hair a secret from him by shaving, shaving, ever shaving -- until one day when they encounter wildman Ifans while on a nature walk. Nathan promptly has the man-creature hauled back to his lab and installed in a glass cage where he commences another experiment in society conditioning which eventually results in Ifans “Puff” (Nathan allows Lila to name this shaggy manimal, to everyone's detriment) becoming a Hugh Hefner-styled man about town (echoes of Peter Boyle's monster in Young Frankenstein, as well as A Clockwork Orange, abound). Meanwhile, Nathan is falling for his (presumably) French lab assistant (Otto), a situation that adds even more dynamite to what is already an explosive set-up. It's impossible to impart the wacky and intelligent vibe Human Nature carries in spades; the closest I can come is to say that both Kaufman's script and Gondry's direction work harmoniously to create a surreal portrait of a trio of self-hating individuals desperate to find their one true path in life. Ifans in particular is the film's moral and emotional linchpin, a man raised to be a thing of nature by a lunatic father, and who later learns that in the eternal battle of man over beast sometimes it's best to let the beast win. Gondry employs a number of arresting filmic techniques here to parallel the man-vs.-nature elements of the film, including rear projection and oddball effects; the entire film has an off-kilter feel, whether it's the scenes of young Nathan engaging in stilted dinner conversations with his parents or the increasingly desperate attempts by Puff to subdue his animalistic libido (over the course of the film he manages to hump just about everything in sight, and it's not nearly as crude as it sounds). Human Nature ends with a fairly pat resolution, which may be the film's only serious drawback. After such a wild and hilarious nonconformist ride throughout, it feels like a bit of conservative conformity that the movie could do without. Everything else about it, though, is pure unadulterated animal fun.

Letters at 3AM
From Window Rock to Albuquerque