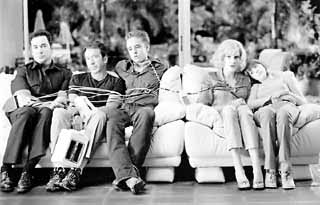 Based on a novel by beloved humorist Dave Barry, helmed by reliable laffmeister Barry Sonnenfeld (Get Shorty, Men in Black), and featuring a cast of some of film's most likable actors, Big Trouble looks like a commercial success based on pre-sold constituencies alone. It's also -- and this is high praise indeed these days -- orders of magnitude better than it has to be. Barry's story, adapted for the screen by Robert Ramsey, is a gleefully overplotted crime yarn that channels in sanitized form the perverse subtropical-noir sensibilities of Carl Hiassen. There are too many plot threads to list, but most relate in some way to the family and professional miseries of a former star newspaper columnist (Allen) who's been fired from his job and is now trying to chisel out a living as a one-man ad agency. In an oblique Kiss Me Deadly/Pulp Fiction salute, the other main story device is a black market nuclear bomb that passes through the hands of various high and low-level hoodlums. Also in the mix are Garofalo and Warburton as bickering Miami patrol cops and a rich vulgarian (Tucci) who has a foot fetish, a less-than-adoring wife and daughter (Russo and Deschanel), and a Mafia bounty on his head. Playing the key role of omniscient narrator is a Fritos-hoovering vagrant (Lee) whose long hair and beatific aura recall a certain major Western religious figure. With the shade of Billy Wilder now watching over my shoulder, I don't want to commit the critical fallacy of proclaiming Big Trouble a comedy masterpiece simply because I laughed my tuchis off while watching it. For one thing, the characterizations are onion-skin thin and flagrantly cartoonish. There's also a somewhat overstructured feel and a couple of running jokes that wear out their welcomes well before the third act. Still, it's a rare pleasure to find a comedy in which the minor gags -- on topics such as the Martha Stewart cult, the surreal allure of cable TV, and the idiocy of sports talk radio -- are even funnier than the big, calculated ones, and in which the cast radiates a constant, collective sense of delight. Other examples from recent years include Galaxy Quest, The Santa Clause (note the recurring Tim Allen motif here), and The Brady Bunch Movie. All unapologetically silly and light as cappuccino spume, all brimming with sneaky-sharp wit, and giddy forward thrust. It's not so much a calculated effect; if calculation yielded great comedy Bandits would've been Academy Award fodder. It's more a state of grace, really -- a happy accident of chemistry and talent. Treasure these charmers when and where ye may. Note: Much has been made of Big Trouble's unfortunate plethora of jokes involving suitcase bombs, airjacking, and lax airport security. These should be non-considerations for all but the touchiest viewers. First, the movie was completed well before September 11 and shouldn't be subjected to any retroactive censure. Second, thanks to the therapeutic irreverence of our mainstream comics, this subject matter is already about as sacrosanct as the Arctic National Wildlife Refuge under Gail Norton and Dick Cheney's stewardship. Time for us all to move on. Or, should I say, let's roll.