The Toxic Avenger series is the franchise that built the house of camp/schlock horror house of Troma Entertainment. In this fourth installment in the adventures of a mop boy turned into a deformed monster, the Toxic Avenger must deal with an evil doppelganger. For more info on Troma see austinchronicle.com/issues/dispatch/2002-03-08/screens_feature5.html. Director and Troma founder Lloyd Kaufman had so much fun in Austin during his SXSW Film appearance last month that he is returning this weekend for the Saturday night screening of his newest film. 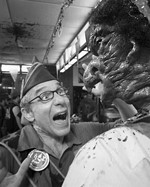 Poultrygeist: Night of the Chicken Dead
Lloyd Kaufman's Poultrygeist is a campy zombie comedy that's full of jokes, chicken suits, spewing geysers of various bodily fluids, and barbs flung in the direction of the fast-food industry. 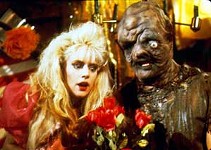 The Toxic Avenger: The Unrated Director's Cut
This is the main movie that built the house of Troma, Lloyd Kaufman's production company devoted to low-budget camp. The Toxic Avenger tells the humorous ...