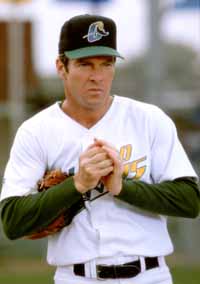 The Rookie hits one out of the park for the “they don't make 'em like that anymore” department. This live-action Disney movie's “G” rating might as well stand for genial, for it will appeal to a wide spectrum of viewers -- young and old, male and female, sports fans and human-interest junkies. The story is based on the real-life baseball career of Texan Jim Morris, who, in 1999, became the oldest rookie major-league pitcher to take the field in 40 years. In some obvious ways, Disney is seeking to repeat the surprise success they scored with 2000's uplifting football rouser Remember the Titans. And to a large extent, the filmmakers succeed in this endeavor. The Rookie embeds its formulaic homilies about believing in your dreams and setting good examples in a plotline so earnest and “storybook” that if the events weren't more or less true, they would be dismissed as altogether hokey. Quaid is a bit old to play the 35-year-old Morris, but he cuts a believable athletic figure and is a lefty like the real Morris. Quaid also marshals his broad crocodile grin and converts its upturn into a square-jawed stolidity. It's enough to make us believe that this Morris is no eternal boy of summer trying to Peter Pan his way through adulthood, but a serious family man not looking to be a diamond hotshot. Benched from the game when he blew out his shoulder early in his career, Morris has made his peace with teaching high-school chemistry and coaching the ramshackle baseball team in Big Lake, Tex., as the movie begins. Rachel Griffiths, in a sadly underwritten role, plays his concerned but supportive wife. “I'm a Texas woman, which means I don't need the help of a man to keep things running,” is typical of the type of comforting refrain she regularly doles out to her hubby. The eldest of the couple's three children, Hunter (Jones) is a tag-along mascot, whose passion and belief fulfill the formula's “cute kid” requisite. The other true believers are Morris' losing varsity ballplayers, with whom he makes a bet to try out for the minors if the team manages to win the district championship -- and much to everyone's surprise, the motivational gambit works. In need of some sort of conflict, The Rookie overlays Morris' story with a thick helping of paternal love issues: Morris' father (Cox) is a military man whose constant relocations of his family thwarted his son's early Little League ambitions, with the final affront being the relocation to West Texas, where the sole ballgame of champions was played with a pigskin. The movie returns time and again to Jim's difficulties gaining his distant father's love and respect. It's one of those male mentor things that might be interesting to compare with the previous screenplay by writer Mike Rich -- Finding Forrester. Music also plays a large role in The Rookie -- the sound of each good thwack of the ball is usually accompanied by a moment of silence followed by a rootsy melody by John Hiatt or John Fogerty. (The music score is by frequent Coen brothers collaborator Carter Burwell.) The Rookie, which was filmed in Austin and the surrounding area (including the Dell Diamond and Ballpark in Arlington), doesn't break any new ground in the baseball movie playbook. However, it does bring it all back home with the assurance of seasoned pro.