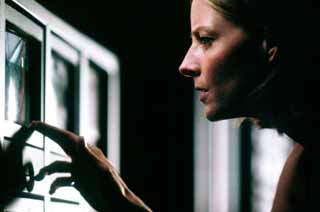 Fight Club. Se7en. The Game. Say what you will of David Fincher's films – too violent, too loud, too flashy, too convoluted – but like a toothy rottweiler with its eyes fixed firmly below the belt, David Fincher's films get you by the ball sac and don't let go. Coming off of Fight Club, a cultural zeitgeist that closed out the last century, Fincher has delivered another attention-getter in Panic Room, a chilly, squirmy suspense thriller, a self-proclaimed “popcorn” flick. Jodie Foster stars as Meg Altman, a recently divorced housewife forced to find new digs for herself and her smart-aleck daughter Sarah (Stewart). They settle on a sprawling, three-story brownstone on the tony Upper East Side (why not gouge the cheating husband one last time?). Sarah likes it for one very cool reason: the “panic room,” a leftover vestige of the paranoid previous tenant. Hidden from plain view and fully equipped with its own ventilation system, private phone line, bulletproof walls, surveillance cams monitoring every inch of the house, even a toilet, the panic room was meant to be a novelty, which is why Meg doesn't bother to get the phone line in there hooked up on their first night in the house -- proof that you should never put off what can be done today. The pair are shaken from sleep, just hours after moving into the house, by the sound of intruders; mom and daughter have just enough time to race into the panic room. Too bad that's the last place they want to hide: What the burglars want is in that room. And while one of them, Burnham (Whitaker), displays a conscience, the other two, halfwit mastermind Junior (Leto) and ski-masked thug Raoul (Yoakam), are ruthless. Steel doors be damned, they're getting in that room, which means the mother and daughter's lives are on the line. In her first film since Anna and the King, Foster is terrific as the emotionally mangled mom, distant and bitter but tiger-shark snarly when it comes to the safety of her only child. Newcomer Stewart, too, is excellent, taking a cue from Foster's toughness (and Foster's stylist -- the two sport matching chin-length bobs). The burglars are more hit-or-miss; Leto is simply awful as the screeching, cornrowed Junior, Yoakam is deliciously creepy as Raoul, and Whitaker does what he can with a thankless part -- that is, to be the conscience (it goes without saying that Whitaker still wows, even with his undercooked role). The typically showy camera moves in the most unexpected ways, to the most unlikely places, but more often than not it's a distraction when the camera sweeps through floorboards and cracks in the wall. It's obvious we're supposed to applaud Fincher for his camera trickery, but a detailed floorplan would have been more appreciated: The film never adequately lays out the house, which makes all the running from room to room to floor to floor more confusing than anything else. Panic Room also would have been served well by more exposition; the action kicks in almost immediately, before we've had a time to warm up to our heroines. (It's a testament to the actresses' likability that we warm up to them nonetheless.) The same goes for the conclusion -- too wham-bam-thank-you-ma'am. Fincher is all business here. Granted, it's a fun business, the business of scaring the pants off the audience. And one hopes Fincher has had fun making a popcorn picture, with his sly references to Rear Window, Rope, and Wait Until Dark (to name but a few) and not a cultural zeitgeist in sight. Panic Room still feels like a Fincher film: It possesses the same smarts, the same visual panache, the same violence. But not the same heart. Sure, the heart of Fight Club and Se7en is a black-tar heart, a snaggle-toothed, soul-sucking, cynical heart, but it beats nonetheless, in the most primal of ways. It doesn't beat here. It tick-tick-ticks with the mechanics of the mind, hitting every plot point, snaring each scare, but it doesn't exhilarate. Let's hope Fincher has enjoyed his vacation in Popcornopolis; now may the real David Fincher, the black-tar heart David Fincher, please resume his post in the vanguard. 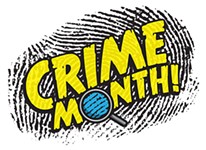