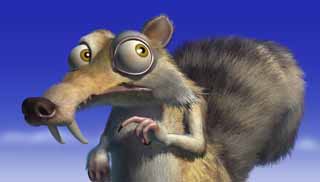 This prehistoric buddy pic has a heart bursting with good intentions, something that goes a long way in dimming from memory its inherent routineness. To be fair, it's a routineness that mars most American children's animation, descendants all of the Disney school of storytelling. A 20th Century Fox production, Ice Age trucks out all the well-tread tenets -- mouthy sidekicks, a couple of splashy songs, the irksome murdered-mother motif -- and wraps them up in a pleasant package. To the filmmakers' credit, it's the “pleasant,” not the “packaged,” you walk away with. As the Ice Age looms, herds pack up and head to warmer climes; left behind are a snoozing sloth named Sid (Leguizamo) and a grumpy, emotionally wounded mammoth, Manfred (Romano), who becomes Sid's unwilling protector. Chance further cements the odd couple's union when they stumble across an abandoned human child and decide to return him to his rightful owners. A too-helpful tiger, Diego (Leary), comes along for the ride, but for reasons less altruistic than Manny and Sid believe: Diego's den leader has ordered him to bring the baby back to the pack for a gourmet feast. The majority of the film is consumed with the trek across a land fast icing over (the visuals are exquisite), and with the personal journey of these three unlikely companions. In short, it's the touchy-feely we've come to expect, but glinting through the cracks are some surprisingly progressive ideas about living in harmony in the midst of nature's unavoidably antagonistic food chain. (Carnivore parents may cringe when kids push away tomorrow night's meatloaf, citing Manny the vegan mammoth as their spiritual guide.) The evolutionary premise is mined for solid laughs, certainly some of the smartest humor of Ice Age; its overall wit isn't quite as sharp as Diego's saber-teeth. Yet Romano, Leary, and Leguizamo, with their metronomic timing and vox box theatrics, prove once again why comics are so good at voiceover work. The real delight of the piece, however, is mostly silent: a running gag starring a part squirrel/part rat (that's “scrat”) who only wants to bury an acorn for the winter. A tough task indeed for a scrat living in the time of rumbly plate tectonics. Director Wedge provides scrat's squeaks, shrieks, and groans in these wonderful, mostly wordless set-pieces that sneakily recall the glory days of Looney Tunes.