Watching Life and Debt, it's easy to see why the 1999 protests in Seattle against the WTO occurred, and by extension (but no less relevant) why certain quarters of the world think the United States and other countries are out to put them down and keep them down. From there, of course, it's only a hop, skip, and a jump to grasping (at least partially) why assorted rogue nations and various nationalist/religious groups have begun a concerted terrorist effort against our country and its allies. To paraphrase Nathan McCall, this film makes you wanna holler. Stephanie Black is a documentarian whose past efforts include work on the Leonard Peltier film, Incident at Oglala, and a longstanding association with PBS and the Children's Television Workshop. She uses the history of Jamaica and its interactions with the International Monetary Fund, the World Bank, and U.S.AID and international trade agreements to show how globalization -- initially developed as a means to assist Third World countries in the shoring up of their flagging economies -- has instead had the opposite effect, crippling the once robust Jamaican economy and forcing the island's indigenous workforce and farmers to make ends meet by working at the massive “Free Market Zone” just outside of Kingston, where many come to work in an IMF-sponsored tax-free environment for little more than a dollar a day. The clothing piecework assembled there, usually for brand-name clothiers in North America, ends up putting little money in the country's coffers and less on the dinner tables of the women workers. Even more distressing is the plight of the Jamaican farmers who can no longer sell their banana crops because IMF regulations imposed on the country after it reverted to independence from the British Crown in 1961 have forced the importation of vast quantities of competing (and cheaper) produce from North and South America. What's more, the Dole/Del Monte/Chiquita triumvirate knows it can get labor far more cheaply in Guatemala and the surrounding area, and with the help of the IMF has blocked any importation of Jamaican produce into the U.S., leaving the country with ghastly mounds of rotting produce and thousands of unemployed family farmers. Stuck with a national debt of some eight billion Jamaican dollars (forced on the country by the IMF's usurious lending policies which were originally hoped to help speed progressive reforms), this island paradise begins to look far more like an island hell teetering on the brink of revolution. Only Jamaica's tourist industry continues to thrive, and that's because the chiefly white, American middle-class tourists are studiously kept near lovely Montego Bay and far from the sprawling slums of capital Kingston. Life and Debt is an eye-opener and a primer on why the IMF and the World Bank are not to be trusted by emerging third-world countries. Like some monstrous streetcorner loan shark, these twin titans of global cashflow dole out the initial loans and then charge egregious interest, with full knowledge of the disastrous results this will have on the borrowers. Black's film (which features occasional voiceover narration from novelist Jamaica Kincaid's A Small Place and a soundtrack featuring everyone from Peter Tosh to Harry Belafonte) puts the lie to the IMF's policy of “international aid.” With friends like this … 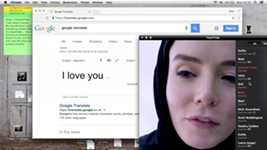