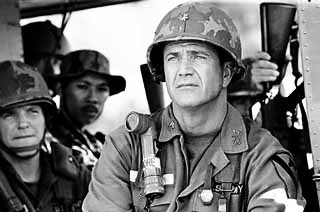 Based on the book We Were Soldiers Once … and Young by Lt. General Hal Moore and Joe Galloway, this Vietnam history lesson initially steers clear of the overused Indochine tropes and instead focuses on one aspect of the conflict that has, until now, resisted telling: the beginning. Gibson, growing more grizzled by the year, plays a younger version of Moore (then a lieutenant colonel), who finds himself leading the 350 men of the First Battalion of the Seventh Cavalry into the Ia Drang Valley on Nov. 14, 1965. This cavalry regiment (which is now borne aloft in helicopters instead of horseback) experienced the American forces' first (and sadly portentous) battle with the North Vietnamese. But long before Moore and his right-hand man Sgt. Maj. Basil Plumely (Elliott, dining exclusively on rusty nails and testosterone) make their entrance into this Valley of Death, the film spends roughly 40 minutes setting the stage with Moore and his troops, among whom is an oddly cast Kinnear as a chopper pilot nicknamed Snakeshit and the perpetually whey-faced Chris Klein as a rookie enlistee so ripe for plucking that he may as well carry his gear in a form-fitting bodybag. Wallace (the award-winning writer of Braveheart) fills the first third of We Were Soldiers with scenes of cocky base-side bravado that at first feel like clichés but must soon be acknowledged as necessary to the extreme mental conditioning needed to prep raw recruits for the cordite whine of battle. There's also a keen interest here -- perhaps not that keen, but it's more than most war films give us -- in the army wives and the inherent sense of community fostered among them by living on a battle-ready government facility. I can't recall many films -- and certainly no recent ones -- that have given anything but short shrift to wartime spouses, and Stowe, as Moore's wife Julie, pulls off a serviceable impersonation of grace under homefront fire. The battle itself is a bloody, seemingly disastrous rout that leaves piles of American corpses as thick as dead brush, and Moore and the flinty Plumely struggle to make sense of both the strategies of their higher-ups back in Saigon and tactical and geographic advantages of their all-but-unseen foe. It bears noting that We Were Soldiers doesn't skimp on the realistic depiction of battlefield horror, be it slow-motion bullets to the throat or the flesh-melting burn of a white phosphorous grenade in the face. Ever since Saving Private Ryan upped the ante with its all-too-accurate depiction of what happens when man meets metal, each succeeding war film has seemed bound and determined to go it one better (or worse, depending on your stomach), and Wallace doesn't shy away from the spurting viscera. (If this keeps up, pre-med students might as well go to the movies instead of poring over boring old Gray's Anatomy.) Is this realism or war-porn? When Wallace turns on the slo-mo bloodbath, it's a little bit of both. Ultimately, though, We Were Soldiers fails to bring as much to the table as it at first seems it might. Gibson's cloying family-man mode is honest but irksome -- get this guy to the front, already. It's enough that we even learn about Ia Drang. No need to make us hug your kids, too. Heaven Is for Real
Greg Kinnear plays a dad who believes his son's claim to have seen heaven. 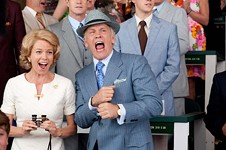 Secretariat
Saddle up for some old-fashioned inspirational movie entertainment with Diane Lane in the lead as the owner of the famed Triple Crown winner.