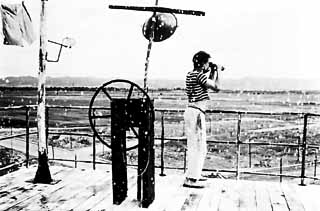 Finding the right words to describe Tuvalu is difficult for reasons that only begin with the fact that this aurally rich movie is nearly wordless. Imagine, if you will, a beloved bastard child of Charlie Chaplin and Sergei Eisenstein, or of Jean Vigo and Chuck Jones -- Delicatessen by way of Metropolis and Ubu Roi. Tuvalu is such a melting pot of influences and inspirations that its tangled genetic code reads like a ticker tape strip processed in Braille. First-time feature director Veit Helmer of Germany (with a surname that perhaps sealed in his destiny at birth) has concocted a unique burlesque goulash that feeds the soul and intoxicates the senses. Although few words are uttered in the course of the movie, Tuvalu is anything but silent, relying on sounds, exclamations, and music to advance the story. Tuvalu also tells its story though the arresting power of its imagery. Filmed in black-and-white and then tinted (the indoor color is a mustardy sepia tone; outdoors, where it's always raining, has a bluish tint), the cinematography by Emil Hristow is essential to the success of this movie. Helmer's compositional dynamics are just as integral to Tuvalu as the intrinsic weirdness of the images: a woman swimming naked with a goldfish in a bowl, a hairdryer that spits out coins, a blind lifeguard aurally tricked into believing his pool is brimming with activity, floating police chalk lines outlining a corpse found in a pool of water -- nearly every sequence has some moment that leaves us scratching our heads over its defiance of the common laws of logic and physics. Grounding Tuvalu's cartoon-like plasticity is a solid knowledge of the visual grammar of silent movies, and Helmer's mad delight in using everything but dialogue to tell this story. The narrative goes something like this: A decrepit old swimming pool in a crumbling Beaux Arts bathhouse (Helmer found just the right location sets in Sofia, Bulgaria) is staffed by Anton (Lavant, who is best known for his lead roles in Lovers on the Bridge and Beau Travail) and his mother, who works the admission kiosk where customers pay with buttons instead of cash. The scant number of patrons allows Anton to ingeniously devote himself to convincing his blind father that the pool is a beehive of activity. His brother wants the old man to sell the property for bundles of cash. Then, into Anton's life, floats Eva (Khamatova), her goldfish, and her father. The gregarious expressions of the actors also generously assist in the film's narrative exposition and overall humor. Some viewers are bound to think that Tuvalu looks and feels too much like a sterile student exercise in film grammar and technique. Yet, if anything, Tuvalu is a study in overstimulation: ideas, gambits, jokes, and surreal jumbles pulse from every frame of the movie's succinct 86 minutes. Tuvalu amply repays the viewer for the attentiveness it requires. Personally, I've just caught up with Tuvalu after missing some opportunities to see it at a couple of American film festivals I've attended in recent years. Don't make the same mistake I did in regard to this limited one-week Austin run. This is one-of-a-kind filmmaking. Even if its grand experiment doesn't appeal to all tastes, Tuvalu is nevertheless recommended for its singular vision -- a concept executed with bravura style, intelligent curiosity, and playful wit. Set sail for Tuvalu today.