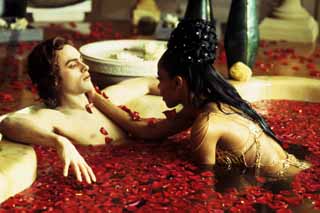 Queen of the Damned

The unofficial sequel to 1994's Interview With the Vampire isn't really a sequel at all, a fact the producers studiously note on the film's exhaustive Web site. It is, instead, an adaptation of Anne Rice's second and third novels in the ongoing series, The Vampire Lestat and Queen of the Damned, respectively, and as such whole stretches of the film may be incomprehensible to moviegoers not already clad in basic black. There's Interview's egomaniacal über-vamp Lestat (with the androgynously appealing Stuart Townsend filling in for Tom Cruise), and various and sundry other minor characters return, but the appearance midway through of the Vampire Queen (the late hip-hop singer Aaliyah) is -- for those out of the femoral loop, anyway -- a puzzle worthy of Hellraiser's nail-studded Cenobites. I've got to admit it's disconcerting to see her playing a walking corpse; it smacks of a nasty brand of irony best left unexamined. She's perfectly regal in the role, though it requires little else of her other than a series of haughty pronouncements and withering glares. She's fearfully slender, too, which goes well with her character Akasha (an ancient Egyptian bloodsucker who's been napping for the past millennium and thus hasn't had much in the way of carbs of late), but looks alarming when you realize there was probably no CG gimmickry involved. But that's beside the point. What does matter (certainly, at least, to Warner Bros.) is how the film's core market is going to react, that being the gothic kids and slathering Rice fans who welcome her every further volume in the “Vampire Chronicles” as though they were starved for catty vampiric melodrama. My guess -- and it should be a good one since there's still an awful lot of black in my wardrobe even now -- is that the Dead Can Dance camp will choke on much of Scott Abbott's frequently inane dialogue but take to their black little hearts the film's excess of style (cinematographer Ian Baker has never met a blue gel he didn't like) and seamless production design. The story has Lestat waking after two centuries or so of coffin-nappin' and forming a truly lousy nü-metal band -- I guess former Bauhausers Love and Rockets are too busy to fill backing positions these days -- who sweep the charts and inadvertently wake up Akasha, Queen of the Damned. Lestat, meanwhile, annoys the rest of the vampiric underworld with his sudden popularity, and predictably they arrive in force to put him away. All of this culminates in a giant concert in -- where else? -- Death Valley, where, in true rock & roll fashion, the vampire Lestat bares a little skin before ramming a microphone stand through someone. He's not Jim Morrison, but he's close. There's more -- with Anne Rice there's always more -- but the whole film suffers from a serious case of overplotting, perhaps inevitable when trying to cram two largish novels into one smallish film. Vincent Perez (Ashe from The Crow: City of Angels) has the best job in the film, that of Lestat's “creator” Marius; he looks less like Eric Draven here and much more like Udo Kier in Taste the Blood of Dracula. At one point Lestat asks him how he found him and Marius replies “That's easy: I just looked for the most gauche house on the block,” which sums up Queen of the Damned better than anything I can think of. 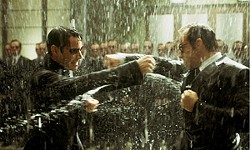