Like many Czech filmmakers -- émigré countryman Milos Forman springs to mind first -- director Jan Sverák looks at politics through the lens of the personal, telling deceptively simple stories about average men and women backdropped by the tide of history. But Sverák is a sentimentalist, not a satirist, and his approach is more formulaic. His acclaimed Kolya (1996) is at its essence a father-son tearjerker set during the Soviet occupation of Prague. Dark Blue World is at its essence a romantic melodrama set during World War II, when the Nazi invasion forced Czechoslovakia to disarm its military. A group of pilots, led by stalwart commander Franta (Vetchy), escapes to Great Britain to serve as volunteers with the RAF, only to cool their heels in English lessons (taught by the irrepressible Anna Massey) and fighting drills on bicycles. Franta's impetuous young best friend, Karel (Hádek, who has an appealing, baby-faced intensity), is particularly outraged, though the rest of the pilots seem content to practice piano and hit on the local lasses. When at last the men are called upon to engage a squadron of Messerschmitts, Karel is shot down, parachuting to safety outside the country home of Susan (Fitzgerald), an English rose married to a missing sailor. One thing leads to another, and both Karel and Franta become fascinated with Susan. As the narrative unfolds, Sverák flashes back and forth between a frame story set several years later in Mirov Prison, where Franta does hard labor at the behest of the Communists. (Intertitles explain that the pilots are politically suspect for having lived and fought abroad.) The frame story is problematic: Because the parallel series of events are so cumbersome, the ambitious but oblique flash-forwards don't adequately convey a politically interesting theme, which comes off instead as an ironic, tragic footnote -- that these men, who fought to liberate their homeland, would soon be considered a danger to it. The film is more of an old-school wartime yarn, crackling with the expected camaraderie among the hardscrabble volunteers. The dogfight sequences are appropriately rousing, and they fit into Sverák's palette of warm-toned, nostalgic visuals instead of sticking out like high tech aerial eye candy (as one has come to expect from flashier, similarly themed domestic productions -- not to name names). An attack upon a Nazi munitions train is a particularly effective action set-piece. Some of the fight footage is recycled from previous productions (such as 1969's The Battle of Britain), but this gambit isn't too terribly obtrusive. More troublesome is the love triangle itself, too limp and convenient to be credible. For one, Fitzgerald's character is so thinly drawn as a model of free-floating feminine benevolence that the filmmakers have surrounded her with about a dozen apple-cheeked orphans from the London blitz in need of babysitting. Though it's got food for thought, Dark Blue World doesn't really push the envelope of its formula where it counts: in the heart. 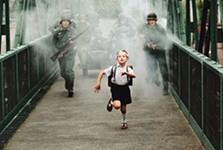