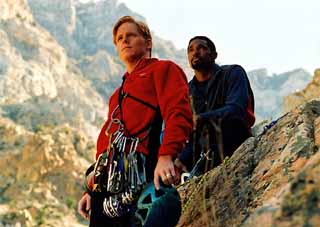 This well-intentioned drama, produced by the Billy Graham Evangelistic Association, leaves no cliché unturned as it charts the path of a cocky mountain climber (George) en route to his spiritual and personal awakening. One wonders if the film's anticipated audience will object too strenuously. It's a handsome enough effort, after all, with its requisite aerial photography of snow-capped vistas. The production values are probably better than they have to be, and the moral of the story is probably unimpeachable from a Christian point of view. Yet the message is driven home as softly as a titanium alloy ice axe; not even the extreme-sports angle or the presence of stalwart thespians Vaughn and Coleman is likely to give The Climb the crossover appeal it seeks. Expert solo climbers Derrick (George) and Michael (Vaughn) have something of a Meet Cute atop a Utah peak, as they're both recruited to rescue the injured son (Stevens) of retail magnate Mack Leonard (Coleman, phoning in a cornpone, good-ol'-boy accent and cowboy-hatted mannerisms). Mackie is so taken with Derrick and Michael's impromptu ebony-and-ivory partnership that he signs the pair as spokesmodels for his chain of discount stores, even though neither wants to work together: Derrick is an Angry Black Man With Absent Father Issues, and Michael is a Devout, Strait-Laced White Widower. But Mackie makes an offer they can't refuse -- sponsoring a climb up a treacherous Chilean peak. He also pledges to build a store on the South Side of Town, an ostensibly blighted urban area which is actually indistinguishable from the film's other clean-cut, mountain-view Provo locations but for a disproportionate population of African-American actors. (Bridges, of Diff'rent Strokes fame, makes a minor appearance.) After skeptical Derrick (“Ain't nobody going to look out for me but me!”) catches Michael in the act of reading Day by Day With Billy Graham, snippets of gently agonistic theological banter interweave with the usual sports-movie filler: training montages, slow-motion high-fives, and sloganistic dialogue (“Going home is not an option!”). In their attempt to make the movie accessible to mainstream audiences, the filmmakers have made it dramatically generic. Though the actor performances are generally agreeable, the characters are broadly drawn. Davis adds a classy note as the father of Derrick's girlfriend, making the most of his limited screen time, but Santiago (debuting here as the girlfriend) can't do much with her bland “good woman” role, despite an engaging camera presence. Nonetheless, the film probably has enough polish and goodwill to give it niche appeal.