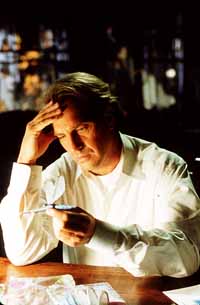 “ … starring Kevin Costner.” Doesn't quite have the same ring to it these days, does it? One of the more startling examples of a star plummeting, the name Kevin Costner is more likely to inspire chortles now than the long-ago cheers of his Academy Award-winning days. And yet, despite Costner's involvement in some of the biggest cinematic debacles of recent memory (Waterworld, The Postman), studio execs still keep greenlighting pictures for the guy, perhaps holding onto some deranged hope that “if he stars in it, they will come.” And they probably will. (At the risk of sounding disgustingly elitist, I'm finding it damn near impossible to have confidence in an American moviegoing public that regularly vaults the latest Arnold Schwarzenegger or Britney Spears trifle to the top of the charts and disregards any number of fine independent films not starring someone headlined in this week's People magazine. But then, there's really no way to say that without sounding disgustingly elitist.) Soapbox aside, Dragonfly is indeed a new film starring Kevin Costner, and he does nothing here to further improve or damage his reputation. Clearly influenced by The Sixth Sense, Dragonfly is a routine thriller that uses kids as a conduit for dead people to commune with the living -- in this case, it's the recently deceased wife of Costner's Dr. Joe Darrow who has something to say. Joe's trying to let the grieving begin after his wife Emily, a doctor, goes missing on a Red Cross mission in Venezuela, but a series of spooksome events won't let him put her memory to rest. Dragonflies, her signature insect, are popping up everywhere; survivors of near-death experiences are bumping into Emily in the limbo-land of the afterlife; and dammit if their pet bird isn't acting mighty peculiar. Friends are doubtful, including Joe's neighbor, played by Kathy Bates, who's still pretty much the best thing to be had in every picture she's in (that's despite her being pigeonholed into endless variations on the role of “mouthy moral center with questionable sexual orientation and a fancy for LL Bean wear”). Joe starts to think he's a little bit nuts, too, but it turns out his wife really is trying to tell him something. To the film's credit, it's a doozy, and pleasantly unexpected -- although the clues were probably all there and I just wasn't paying enough attention. Very little here begs to be paid attention to. While the suspense “money” shots are genuinely creepy, they're overheated by the pushy score, and frankly, the money shots are all this film has. The camerawork is mostly underwhelming, the dialogue relentlessly cornball (just try swallowing that guffaw when a sulky Costner mews that Emily was his “ultimate partner”). As for the man who fell to earth, well, Costner's just a soggy slice of milquetoast here -- not bad, mind you, but not what you'd call a square meal, either.