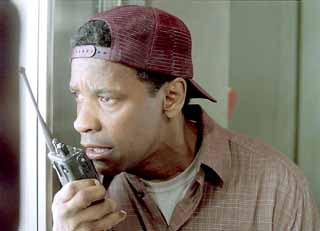 John Q. is a rabble-rouser that takes a swing at several American institutions with a populist fury seldom seen in the movies today. The targets of its rage are multiple: a medical profession that's forgotten the Hippocratic oath; law enforcement officials motivated only by public perception; a news media characterized by blow-dry superficiality; cost-cutting employers focused only on the bottom line; a heartless social services bureaucracy bound up in red tape; and, most pointedly, a health insurance system that would let a little boy die of cardiac failure rather than fund a life-saving heart transplant. Crude but effective, John Q. is not so much a message movie as it is a diatribe against the unfairness of a system that values profit over human life. Not content to communicate its angry frustration in a more conventional manner, the film uses a family man's desperate act of taking hostages in a hospital emergency room to get our full attention in regard to what it has to say. (In many ways, John Q. is a contemporary update on the 1975 film Dog Day Afternoon, but with a less subtle political viewpoint.) The human drama inside the ER is far more interesting than the machinations outside, not only due to the presence there of its emotional core (in the form of John Q.), but also due to the hostages' animated discussion of the issues about which this movie is so fired up. While the microcosm of society inside the hospital seems a little too pat (although Griffin's home-boy is a welcome provocateur), it's still refreshing to hear this kind of debate in a movie. The film's biggest flaw lies in its too-obvious casting of the bad guys: One look at Woods, Heche, and Liotta, and you just know that you're supposed to hiss. Woods is as reptilian as ever as the cardiosurgeon who pleads that his hands are tied; Heche is instantly unlikable as a cold-hearted hospital administrator with ice in her veins; and Liotta is so slimy as an inept police chief that he nearly glistens. (Furthermore, a couple of these characters' 11th-hour redemption is questionable, particularly after the way they've behaved in the beginning.) As for the rest of the film's cast, Elise makes a fierce impression as the wife and mother who is as determined as her husband to ensure that her son not die of societal neglect. But, as expected, the heart and soul of John Q. lies in Washington's amazing turn as a man backed so far against the corner that he must take drastic measures to protect those whom he loves. Always the consummate actor, Washington is that rare mix of strong masculinity and almost-childlike vulnerability. Brando in his prime had that onscreen quality, and Washington is a worthy successor to that legacy. It's hard to imagine how anyone could remain dry-eyed while watching the scene in which John Q. tries to cram in a lifetime of fatherhood advice in a goodbye speech to his son. It's a crystalline moment made pure by Washington's simple but emotionally devastating delivery, one that attests that he may very well be the actor of his generation.