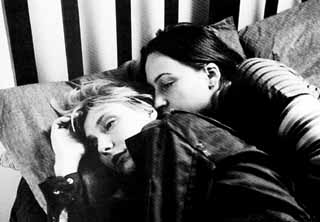 Two siblings undergo a symbiotic crisis in this effective psychological drama by filmmaker David Barker, who has recently moved to Austin to work with the Cinematexas Short Film & Video Festival. Dark, rigorous, and rich in character detail, Afraid of Everything does not lack for comic touches, either. One sister is an agoraphobe, the other a teenaged half-sister from Israel. In the middle is a patient but confused and frustrated husband. Filmed in New York but employing a largely Austin-based crew, Afraid of Everything benefits greatly from Austinite Deb Lewis' stunning black-and-white cinematography. The compositions and camera movements are essential to the film's narrative effect, and the visual texture is as rich as velvet. The film has showcased at the Sundance and Austin Film Festivals, as well as many others. Based on this work alone, David Barker is a welcome addition to town. 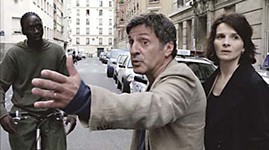 Caché
In this challenging, tension-agitating film a privileged French couple become vulnerable when menaced by an unseen observer who constantly watches them. 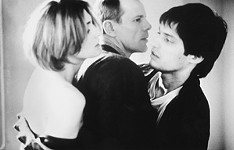 Confusion of Genders
This French sex comedy was not reviewed at press time.