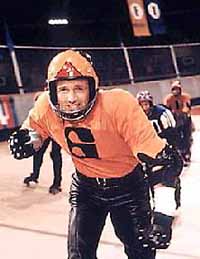 John McTiernan has never had a problem choreographing powerful, knock-down action sequences before, so why does Rollerball feel like the work of a grade-Z hack? Certainly McTiernan's work on the first two Die Hard films (and even the much bedeviled Last Action Hero) was top flight, made up of equal parts skillful editing and white-knuckle suspense. But in this unnecessary and ill-advised remake of Norman Jewison's 1975 semi-classic, the action, the characters, and especially the editing all feel rushed and hastily constructed. It's as if McTiernan made it midway through the shoot and then jumped ship, leaving the film's completion to the fourth AD and a gaffer or two. Much has been made of the fact that the film was scheduled for an earlier release but was put on hold when local Internet film guru Harry Knowles caught an early screening and declared it godawful. MGM apparently held on to the film for some drastic re-editing, but a comparison between Knowles' original Web site complaints and the final version reveals a studio (and presumably a director) confused about how to salvage what was perhaps an already unsalvageable project. For starters, the wisdom of remaking the film is, in itself, questionable. Like Jewison's original, McTiernan's film revolves around a gladiatorial sport loosely based on roller derby and no-rules football, but where Jewison's film also semi-tackled issues such as corporate control over both sporting events and society itself, this new version (set in the present, unlike the original film which oozed Seventies kitsch futurism) has the titular games unfolding in the collapsed and lawless societies of the former Eastern Bloc among faceless sponsors and a who-cares, strictly minor-league backstory. Here, the fall of Communism breeds not democracy, but organized chaos, a real-world parallel about which McTiernan fails utterly to elaborate. Teen heartthrob Klein (American Pie) is woefully miscast as rollerball star Jonathan Cross, who, along with buddy Marcus Ridley (LL Cool J), discovers that league owner Petrovich (Reno) is skewing his own television ratings by upping the on-track mayhem to lethal levels. When he's not socking it to the man (or men, or women), Cross is getting hot and heavy with female rollerballer Aurora (Romijn-Stamos). Score one for women's rights: In a film smitten with dubious dialogue and oddball line readings, she gives the one performance that doesn't make you want to heave a bowling ball through the screen. Of course, in its downward course from a heavy R rating to a relatively tame PG-13, Rollerball has abandoned the gore and nudity that, ironically enough, could have made it a trashy pleasure. Instead, we're subjected to endless and incomprehensibly edited sequences of the players skating and cycling around the figure-eight track as the camera scoots in, around, and over them; I defy anyone to tell me who's winning at any time, or for that matter to explain the rules of rollerball without using chaos theory and a sheaf of blotter acid. Worst of all, Jean Reno, an actor with more charisma in his five-o'clock shadow than most performers manage in their whole career, is saddled with a generic bad-guy role that makes Gary Oldman's turn in The Fifth Element seem like a model of restraint. Bad and baffling from the get-go, probably the only good thing to come out of this Rollerball is the boon it gives the porn industry in terms of another ready-made title to spoof.