If your experience thus far with Japanese animation (anime) has been limited to late-afternoon brushes with the Cartoon Network's Toonami and the odd Pokémon episode, you've been missing out on one of the most important and exhilarating forms of animated filmmaking since old Walt doodled Steamboat Willie. Generally populated by characters with alarmingly large eyes and microscopic waists, anime has been around at least since writer Osamu Tezuka and director Rintaro first teamed on the mid-Sixties artifacts Astro Boy and Kimba the White Lion. The genre has come a long way since then, and features everything from panoramic storylines that rival anything Philip K. Dick ever came up with to the graphic sex- and violence-laden horror shows known as hentai. Metropolis, based on Tezuka's late-Forties manga (comic book) of the same name, features none of the overripe sexuality that marks so much of the current crop of anime, and instead focuses on eye-popping futuristic visuals and a plot that encompasses such heady themes as class, race, and eternal life. It's a mini-epic, bursting with ideas and overflowing with some of the most spectacular animation ever seen. Using a combination of traditional, hand-drawn cel animation and computer graphics, Metropolis is set in a future world where robots and humans coexist, albeit not as equals, but as master and servant. While a powerful political overlord by the name of Duke Red schemes to complete an all-powerful “ziggurat” that will -- he promises -- aid all mankind, but which is, in reality (and none too surprisingly), a massive weapon through which he can control the world. Sounds familiar, I know, but Tezuka's tale runs far deeper than your average Fleischer Brothers' Superman episode. There's Tima, a robotic girl unaware of the circuitry boiling beneath her translucent skin and Duke Red's nefarious plans for her; Kenichi, Tima's rescuer and eventual soulmate (of sorts); and Kenichi's detective pal Shunsaku, who is on the trail of missing scientist Dr. Laughton. Yes, it's a tad confusing at first, but stick with it and you'll be rewarded by 90-plus minutes of truly astonishing animation that gives even the legendary Akira a run for its money (indeed a handful of Akira's creators -- including screenwriter Katsuhiro Otomo -- worked on Metropolis). The most amazing thing about the film, however, is the use of the city itself as a character, which rivals Ridley Scott's Blade Runner for sheer, sprawling audacity. Populated by flying cars, whining cleaner-'bots, and more background detail that you can shake a hyperdrive at, the city itself is perhaps the best and most fully realized character in the film. By the time the explosive finale arrives (with a wistful Ray Charles crooning over shots of cataclysmic destruction, no less), you'll be hard pressed to name a recent film with this much action, pathos, and smarts. It's not Fritz Lang, but it's mighty close. 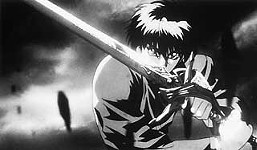 X
“What is going on here?!” cries a bloodied character midway through director Rintaro's apocalyptic anime bloodfest. What, indeed. As is so often the case with ...