One of the sickest movies ever made, this epic from the Godfather of Gore, Herschell Gordon Lewis, is remarkably durable. Brimming with chicken-fried Confederate yahoos, the film is a Northerner's worst nightmare. A backwards Southern town comes to life once every hundred years to wreak some very creative and violent revenge on travelers who stumble into their lair. The violence is most inventive and gruesome. However, the movie will have you cringing and smiling at the same time. Farewell to the King of Grindhouse
Mike Vraney, founder of Something Weird Video, dead at 56 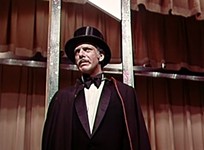 The Wizard of Gore
My favorite film by this low-budget master slasher features a magician who hypnotizes his audience while he saws women in half. ...