If it seemed as though filmmaker Todd Solondz wanted nothing more in his last two films, Welcome to the Dollhouse and Happiness, than to toss unseemly provocations at his apprehensive audience, then his newest feature Storytelling is certain to win him no new converts. You might think that after revealing the most sympathetic character in Happiness to be a child molester there would be few effronteries left for Solondz to fling in our faces, but this master of suburban nihilism has unearthed a few more sour grapes for us to suck on. Storytelling mounts yet another assault on our sensibilities. The movie's structure resembles something more like an illustrative essay than a conventional narrative, and although it possesses characters and threadbare storylines, it seems that the real subject of Storytelling may be Solondz and his filmmaking aesthetic. The film is organized schematically, all the better for us to take in its arguments, and it sets up various commentators within this structure who serve as our mouthpieces, questioning the motives and intentions of the man behind the curtain. Storytelling is divided into two separate sections: The first part is labeled “Fiction” and unspools during the first half-hour; the second is called “Non-Fiction” and continues for the next hour. Inherent in both sections, are questions about the stories and truths we tell ourselves: how we objectify ourselves and others; how the act of telling stories exploits the subjects and our own need to shape reality; how the stories we tell ultimately reveal more about the tellers than the subjects. Solondz's movie rarely strays from this metacritical approach. The two stories he presents are like course assignments in the Solondz Advanced Seminar in Storytelling. His sharp sense of humor and character detail keep the stories from becoming dry classroom exercises, although he never allows us escapist entrée into the stories themselves. “Fiction” is set on a college campus in the mid-Eighties and tells the story of two students in a creative writing seminar, Vi (Blair) and her lover with cerebral palsy Marcus (Fitzgerald), and their relationship with their professor Mr. Scott (Wisdom), a Pulitzer Prize-winning author who resents his role as a black man teaching privileged white students at a second-rate college. The students convert their experiences into semi autobiographical fictions, while the professor uses the prejudices and stereotypes of his white female students against them in Mandingo-like sexual ploys and humiliation rituals. (It is here that Solondz resorts to another metacritical device by using obliterating black bars -- in an oversized version of what Kubrick used in Eyes Wide Shut -- to block out MPAA-censored sex acts.) Meanwhile, the other students in the seminar serve as our constant chorus of critical commentators. In the second story “Non-Fiction,” Solondz tells the story of nerdy shoe salesman Toby (Giamatti), who wants to be a documentary filmmaker in order to tell the truth about high school life today. He finds his perfect subject in Scooby (Webber), an apathetic teen whose sole ambition is to become Conan O'Brien's sidekick and become famous. Scooby's suburban family is headed by patriarch John Goodman and his fatuous wife Julie Hagerty. Little brother Mikey (Osser) torments the housekeeper Consuelo (Ontiveros). For an added ironic touch, Toby's cameraman in the making of American Scooby is Mike Schank, the wasted musician sidekick of would-be filmmaker Mark Borchardt in American Movie. Toby's editor (Potente) and the preview test audiences again stand in as our surrogate commentators. In the end, Storytelling provides an intriguing window into the imagination and hermetic analysis of Todd Solondz. Newcomers should be advised that this is not an introductory course. 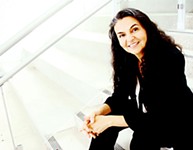 Do Tell
The Living Room makes a space for everyone's stories 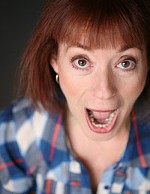 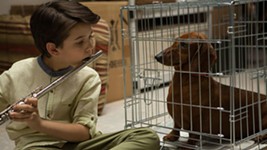 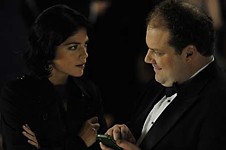