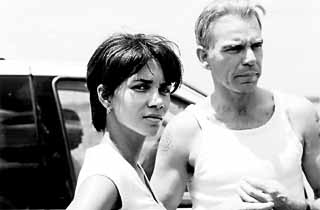 Monster's Ball is the kind of quiet, effective film that burrows under the viewer's skin and takes root before you've had a chance to realize that it's permeated your constitutional makeup. Somehow, that seems fitting for a movie that delivers such a potent picture of how race is often experienced in modern-day America. It's an experience that runs deeper than mere surface and skin color. It involves histories and legacies and the perpetuation of the familiar. The characters in Monster's Ball break boundaries despite their best intentions of keeping things just the way they are. Forster directs the movie from a screenplay by Milo Addica and Will Rokos, but the story's most persuasive aspect is, undoubtedly, the key performances by Thornton, Berry, and Boyle. These actors imbue their characters with hard-bitten precision and wordless resonance. What they don't say is as important as what they do express. Monster's Ball tells a story of characters who are thrown together by circumstance and need. These are characters who have arrived at similar places in their lives but their paths would, most probably, have never intersected but for the vagaries of fate. Hank Grotowski (Thornton) comes from a family of men in rural Georgia who have traditionally worked for the state Department of Corrections on death row. Hank's father (Boyle) is a racist Southern cracker who, though retired to a wheelchair, is still the unimpeachable ruler of his all-male household. Hank's son (Ledger) is a newcomer to his family's occupation, but finds its grisly tasks to be unpalatable. Hank and his father heap scorn on the young man for his lack of fortitude. In a separate story arc, Berry plays Leticia, the mother of an obese young boy (Calhoun) and the wife of a man (Combs, in a moving performance) who is executed by the state. Letitia is a conflict of emotions -- tired of visiting death row, tired of ministering to her overweight youngster whom she both adores and ridicules, tired of the poverty that prevents her from glimpsing any horizons but the immediate. Chance brings Hank and Letitia together, their individual experiences of loneliness and desperation unite the two in a lustful and tender relationship that surprises them as much as it fulfills them. Whether these two have any real future together is beyond the scope of this story. But what is true is that the course of their individual life experiences have converged into this shared moment in time. The specters of the past argue against the success of this relationship between two of the unlikeliest of lovers. To what extent is it possible to escape the legacies of racism, violence, and poverty? Psychologically, the odds are against them. Yet their story has such urgency and desperation for happiness that we unconsciously root for them -- and for ourselves -- to overcome the obstacles of the past. It is the only chance of altering the future.