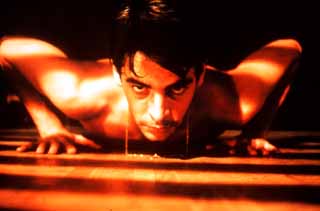 Fusillades of lead and freshets of gore: that's what love is made of in this Argentinian crime story about two gay bank robbers affectionately called “the Twins.” Cupid's quiver also consists, somewhat less surprisingly, of betrayal, madness, and a whole mess of energetic sexual couplings that run the gamut from straight to queer to somewhere in between. If the characters in Piñeyro's film aren't putting holes in each other with barking submachine guns, they're likely drilling some other type of hole, and that fuzzy and bloodied borderline between sex and violence is what gives the film its undeniable frisson. Like a breathy round of sadomasochistic fun, it's both repellent and alluring, the principles of pleasure and pain doubling back on themselves with lazy, reptilian ease. Loosely based on the real-life exploits of a criminal duo in Sixties-era Argentina, Eduardo Noriega (of Abre Los Ojos and Guillermo del Toro's upcoming The Devil's Backbone) is Angel, and Leonardo Sbaraglia is Nene, his partner in crime and in the bedroom. We first see them exiting a public bathroom stall in Buenes Aries (presumably) after an illicit quickie, and the pair almost immediately take up the criminal life, falling in with a gang of bank robbers working with inside help to knock over an armored car transporting the day's deposits. “Have you heard of the Twins?” says the criminal mastermind, and just like that they're in the game, which, as these sorts of things so often do, goes horribly awry. With dead cops all over the place and Angel sporting a fresh new hole in his torso, the duo, along with wheelman Cuervo (Echarri) and his sexy, libidinous moll Vivi (Fonzi) skip town to Uruguay where the eventually hole up in a seedy and stuffy apartment while waiting for the metaphorical heat to die down. There the pair's unswerving allegiance to each other begins to fray beneath the boredom of hiding and the slow-burning madness that has engulfed Angel's mind. “I hear voices,” he tells Nene early on. “All the time.” Not a good sign in any relationship, and communication with your lover is always just that much more difficult when the phantoms in your head won't stop telling you to kill, baby, kill. For all its dazzling and lusty visual panache, Burnt Money suffers from two major drawbacks: It's too long by a good 20 minutes (Piñeyro loves dissecting the tedium of international flight, and it gets awfully, well, tedious), and the entire film is overlayed with an ongoing narration that quickly becomes aural clutter. Between the conversations of Nene and Angel and the narrator's droning (and obvious) expository yammer, it's sometimes hard to tell from the subtitles who, exactly, is saying what. That aside, the film is a ripe and juicy slice of gangster hell; it's nearly as adrenalized and hopped-up as its anti-hero protagonists, whose randy tussling both in bed and in the middle of gunbattles sports a creepy flash flair. There's a hint of Godard's Breathless here, too. Fonzi resembles no one so much as Jean Seberg's little Latin sister, and Echarri has Jean Paul Belmondo's brazen machismo down pat. Well worth seeing if you have even the slightest interest in guns and sex and the interplay between the two (and who doesn't?), Burnt Money also has, you'll forgive the pun, style to burn.