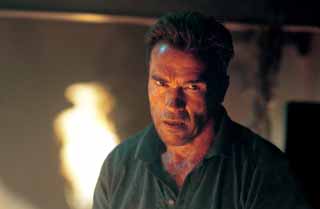 If I tell you this film is a subpar action mishap, does that mean the terrorists win? Let's hope not: Collateral Damage, the new film from director Davis (The Fugitive), sibling screenwriters Peter and David Griffiths, and writer Ronald Roose (who scripted 1979's great The Wanderers of all things), plays like a bad adolescent revenge fantasy on Ritalin, all jagged editorial edges and silly, pumped-up testosterone. It's unlikely that anyone's ever going to mistake hulking hero Schwarzenegger for a Mensa member, but this messy and simple-minded film is just plain dumb. It's not Schwarzenegger's fault this time out, though. Some love to hate the big lug, equating his massive frame and Teutonic speech patterns with an inability to emote properly or, worse, outright boorishness. That's a mistake on the order of saying Steve Buscemi is a creep because he so often plays one in the movies. (Not so say the guys at NYFD Engine 55, Buscemi's old firehouse.) Schwarzenegger has proven his cinematic mettle in everything from John Milius' Conan the Barbarian to James Cameron's True Lies, and if his range seems to be a bit crimped these days, chalk it up to being forever pigeonholed as a tough-talking he-man and a whole lotta muscles, which, to a very large degree, define him almost en toto. Sadly, Collateral Damage doesn't ask the former Mr. Universe to do much more than ripple his biceps and adopt the sort of facial expressions that make him look as though he's just shotgunned a wasabi-and-Everclear powershake. It's fun to watch the various shadings of emotion pass below his cliff-like brow, but soon enough the sad/glad/mad Arnolds all look the same. Again, I blame this more on the film surrounding this actor than the actor himself. The story has heroic firefighter (and could there be any other kind?) and loving family man Gordy Brewer waging a one-man war against terrorism when his wife and young son are inadvertently killed by one of Colombian bad guy Claudio “the Wolf” Perrini's (Curtis) bombs. Seeking the counsel of a CIA spook (played with weasely abandon by Elian Koteas) who ultimately does nothing to help, Brewer travels to the wilds of Colombia on his own and single-handedly saves the proverbial day. There's not much else to Collateral Damage, though the film does toy with the marginally sturdier notion of the moral debasement implicit in vendetta behaviors. It's too little, too late, and, frankly, too silly when tossed in among some of the worst dialogue Schwarzenegger has ever had to utter. Davis, who has shown some flair with action in the past, here relies far too heavily on stock genre tropes that seemed cobwebby and altogether dull 10 years ago. He even borrows liberally from his own back catalog, at one point having Brower topple over a waterfall (à la Harrison Ford in The Fugitive). This time, however, the effect is achieved via computer graphics, and the compositing is poorly rendered, making Schwarzenegger's character appear out of synch with the surrounding action. Thankfully Schwarzenegger's filmic reteaming with James Cameron is nearly upon us in the form of True Lies 2 and then in 2003, Terminator 3: The Rise of the Machines. Until then Collateral Damage can await its turn on the resurrected Mystery Science Theater 3000, where it quite rightly belongs.