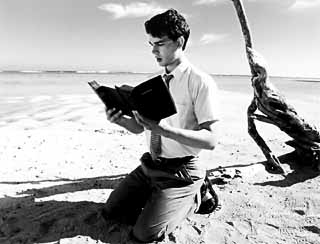 The Other Side of Heaven

The Kingdom of Tonga certainly looks like paradise. Sandy, sunny beaches, gorgeous natives prowling around in not all that much, zero modernities to distract from the natural beauty, and some homegrown moonshine to while away the hours with. But because this isn't Return to Blue Lagoon, but rather the film adaptation of Elder John Groberg's memoir of his missionary days in Tonga in the Fifties, you can bet that moonshine won't be around for long. This earnest family drama begins at a sock hop at Brigham Young University, where we're introduced to a 19-year-old John (Gorham) and his sweetheart, Jean (Hathaway). Their courtship is cut short when the young Mormon gets his shipping orders -- a three-year stint serving the people of Tonga with their God papers -- and it's in Tonga that the bulk of the film takes place. With the aid of a local convert, Feki (an affable Foulau), John attempts, often unsuccessfully, to bring God to the Tongan people while surviving a number of natural disasters and the heartache of leaving behind his best gal. Although nonbelievers might cringe at the film's religious themes, first-time director Davis takes an even-handed approach to the film's spiritual message, avoiding proselytizing or any of the Armageddon overtures contemporary Christian films have taken such a shine to as of late. In fact, I can't recall a single overt mention of the Church of Jesus Christ of Latter-day Saints. The preaching here is of a more generic nature, and more palatable, too -- at least, to a general audience (John urges the locals not to drink, not to have premarital sex, and the like). His travails on the island are told in an episodic fashion, skipping easily from hurricane to death to comic language-barrier sketches to some beachside baptism, and while the material is certainly interesting, Davis doesn't do full justice to the gravity of these events. There's little dramatic tension in the piece, never any real sense of danger even in the face of unimaginable calamity. This soft-coating of the material is probably a concession to the target audience -- families who don't want the bejeezus scared out of the young kiddies. (Having the Jesus inspired into them might be closer to the filmmakers' intention.) Still, you can't really fault a filmmaker for trying to provide good-natured, clean-cut, and gratifying family entertainment that doesn't require a wisecracking canine or flatulence funny business. (There is a running burp gag, but even that feels like something out of Cricket.) The film also does no disservice to the gorgeous landscape (shot in the Cook Islands and nearby New Zealand), and the film has a professional polish to it that belies its relatively small budget.