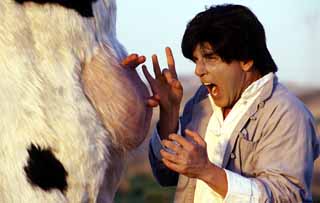 In England they're getting Jean-Luc Godard's newest – Eloge de L'Amour – right about now, while stateside we're being subjected to (and subjecting others, thanks to the miracle of foreign distro) writer/director Steve Oedekerk's latest exercise in what I like to call “the cinema of screechy hellsuck.” Oedekerk previously directed the second, less funny Ace Ventura film and then penned both Nutty Professor updates, which means he has a way with fart jokes, fat folks, and little else. What's worse, he's decided to lodge himself in front of the camera this time out – as the star of the film, no less – a move that rivals Al Haig's “I'm in control” in the brazen chutzpah department. Oedekerk's no Al Haig, though, and let's face it, Kung Pow is no movie, either. A parody of martial arts chopsocky flicks that apparently took the slow boat over, this might have been funny 10 or 15 years back, but these days it's just insipid and unrelentingly boring. Stealing a page from Woody Allen's What's Up Tiger Lily?, Oedekerk has eased his way back into the director's chair by – heh, heh – buying a previously shot Mandarin kung-fu film (1977's Tiger and Crane Fist) and digitally inserting himself and a host of (generally well done) CGI critters and characters inside the original picture. Dubbing over the old soundtracks, he's retooled the original into a woefully inept comedy that features himself as the Chosen One, a young martial artist who, as a child, saw his parents murdered by the villainous Master Pain (or Betty, as he likes to be called). Upon reaching adulthood, but surely not maturity, the Chosen One goes after Betty and his Evil Council of Fu Manchu-esque high-kicking ne'er-do-wells (who have a fleet of airborne pyramids, naturally). Vengeance is a dish best served cold, but I doubt even Khan and Company would have been able to stomach this foul meal, which includes kung-fu cattle, enough fart jokes to lay waste to the Farrelly Brothers empire forevermore, the single-mammaried mystery woman Whoa (Tung), and a self-actualizing, “real” tongue. In between there's a raft of unfunny Matrix references and an ongoing battle to see who can perform the most bizarrely inappropriate dubbing job. It's incongruously humorous to see the off-kilter lip-synching that dazzles the funnybone in some of those old Shaw Brothers' semi-epics of the mid-Seventies that spawned the whole Hong Kong chopsocky market, chiefly because the erratic dubbing and clueless subtitles were unintentional mistakes. Parodying those golden moments successfully, however, is virtually impossible to do, as Oedekerk proves throughout this film's 81-minute runtime. Adding insult to injury, fans of HK Shaolin Monkey masterpieces will find Oedekerk's lazy and witless approach an effrontery to their favorite genre. Where the hell are those Hollywood Ninja Assassins when you really need 'em? 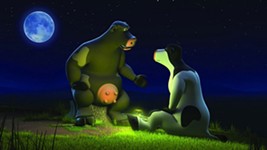 Barnyard: The Original Party Animals
Yet another computer-animated film about talking animals offers a fine message for the kids, but little originality.