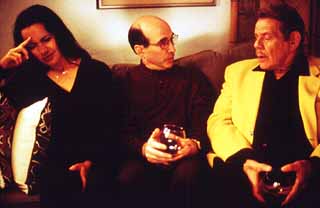 To get a sense of this goofily funny, oddly tenderhearted mock-documentary, imagine Jerry Stiller delivering, with his typical blustery near-rage, a eulogy containing the following epigram: “Art is a marvelous, wicked monkey with a jockey's cap and whip, screaming, `Create!'” It's random, perhaps even inexplicable, but lovable, and nary a minute of the film lacks an in-joke, showbiz cameo, or groan-worthy pun from the world of schlock filmmaking. Not all of them land perfectly, but the movie is so sweet and indefatigable -- like its hapless protagonist -- that you want it to keep trying anyway. Morty Fineman (Stiller) is the sort of self-financed exploitation film artiste who casts Amazonian B-movie über-vixen Julie Strain (appearing as herself) as Ms. Kevorkian, an assisted-suicide advocate with a skintight gold lamé nurse's uniform and an M-16, to make an intellectual case for death with dignity. (Later, blaxploitation star Fred Williamson pops up in the environmentalist girl-gang flick Eco-Angels, warning a buxom biker babe against skinnydipping in a lake full of phosphates.) Needless to say, Fineman Films is virtually bankrupt, despite the patient ministrations of Morty's daughter Paloma (Garofalo), who, as the company president, brokers deals with such unlikely collaborators as an orthodontists' union and convicted serial killer William Henry Ellis (Hankin). (The latter, restrained with a straitjacket and handtruck, envisions the story of his 63 murders as a Broadway-style musical.) Will our heroes -- who also include Perlich as Morty's fanboy myrmidon -- hit the big time at the High Desert Film Festival, a showcase for the scenic locations and legalized prostitution available in Chaparral, Nevada? As with many a spoof, there's very little story to speak of; it holds the gags together like Bondo. Nor is the mock-documentary conceit sustained. In seeming defiance of the plot logic, a worshipful film crew tags along intermittently, collecting soundbites from the characters and from appreciative Hollywoodians with pulp-movie roots (Ron Howard, Karen Black, Peter Bogdanovich), even as Morty and company languish in apparent obscurity. The Independent is still a bright, appealing little comedy, as good-natured and genuinely appreciative of its quixotic would-be artists as Ed Wood and Waiting for Guffman. Everyone involved in the production is clearly having fun, and it's probably worth the price of admission just to see the excerpts from The Whole Story of America, Morty's ponderous $32 million magnum opus, and The Simplex Complex, a government hygiene film in which a frisky G.I. contracts herpes after a chess game with the Grim Reaper -- who represents not death, but “an uncomfortable burning sensation.” The filmmakers have taken such care with Morty's vision that all 427 of his pictures have titles, available in a searchable database at the The Independent's promotional Web site, www.finemanfilms.com. Sadly, 1972's Lawn Honkie and 1983's Acupuncture Academy II: Pointy, Pointy, Pointy aren't featured in the movie, but The Foxy Chocolate Robot and Whale of a Cop are consolation enough. (The Independent premiered at the SXSW FIlm Festival 2000.)