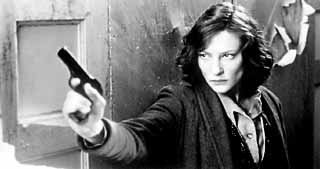 For a select portion of the population who like their pleasures guilty, melodrama can be a glorious thing: war, valor, intrigue, star-cross'd lovers, betrayal, bursting bodices, the like. But to work, melodrama has to mean it -- to be pulp, not pap. It's the difference between weighty and wan, between breast-beating and limp hand-wringing, between teeth-gnashing and mewing sighs. In the hands of the anemic Cate Blanchett and her accommodating director, Charlotte Gray is pap, a thin film that fails to capitalize on the juicy potential of Sebastian Faulks' source novel of the same name. When her lover, an RAF flyboy named Peter (Penry-Jones), is shot down over occupied France, Scottish gal Charlotte Gray (Blanchett) decides to do more than just knit socks for the boys in the trenches. She enlists in the Special Operations Executive (SOE), a real-life elite organization devoted to sabotage efforts in enemy-occupied territory. The SOE is a fascinating well to draw from; unlike most military forces in the war, the SOE's ranks included females, ordinary women who engaged in risky operations -- so risky in fact that more than a quarter of SOE agents died in their efforts. After a brief training montage, Charlotte is off on her first mission as an SOE agent, parachuting down into Vichy France under the assumed identity of “Dominique.” What was meant to be a simple test mission, a milk run, is botched; awaiting further orders, the in-way-over-her-head Charlotte scuttles in residence at the crumbling villa of Levade (Gambon), the father of a local Resistance leader named Julien (Crudup). There, Charlotte cares for two Jewish boys hidden at the villa and aids Julien in his Resistance efforts, all the while attempting to (in no particular order): repair Julien and his father's damaged relationship; avoid a compromising situation with a sleazy Nazi sympathizer; ferret out her downed lover; and fend off her growing attraction to Julien. Each of these subplots, as well as some much-needed context and clues to Charlotte's situation, are but ancillary concerns to director Gillian Armstrong (Oscar and Lucinda, Little Women). Mostly, Armstrong seems consumed with filling each soft-focus frame with Cate Blanchett's admirable cheekbones and couture costuming. (For her part, Blanchett appears rather obliging with her ever-present “I'm ready for my closeup, Ms. Armstrong” demi-glaze.) Rancorously short shrift is given to Charlotte's conflicting emotions for Peter and Julien, the stuff of which should be the very crux of this melodrama. Peter is afforded not much more than a couple of pained looks from Charlotte once she's hit French soil, but then you can't blame her for her disinterest considering Peter, as played by stage actor Penry-Jones, has all the appeal of a moist, dirty dish towel -- hardly the type one goes jumping out of planes into enemy territory for. But Crudup stirs the soul like a leading man should. He infuses in Julien a tragic, sometimes foolhardy man-childness; he's the archtypical hero every woman wants to save -- and be saved by. In short, exactly the type one goes jumping out of planes for. But the script and direction allow for too few of those teasing, forbidden-love moments that make melodrama so delicious, and Blanchett is too busy looking noble to bother convincing us she's remotely interested in the affair. After showing initial promise in Shepak Kapur's stunning Elizabeth, Blanchett's potential seems to have fizzled out just as the bewildering Cult of Cate has grown in number and loudness. Every element of Charlotte Gray that works, sometimes exquisitely -- from the intricate set design and moody cinematography to Stephen Warbeck's wonderfully weepy score and the heartbreaking oil-and-water performances of Crudup and Gambon -- is undone by Blanchett's dull, wooden delivery. She's the pap that kills the pulp the rest of the film is bellowing out to be. 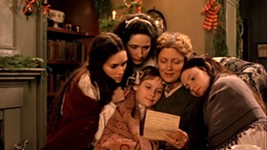