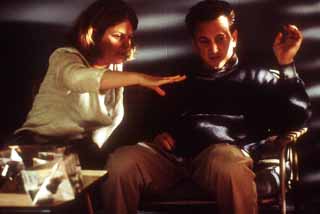 Viewing I Am Sam is an experience of successive facial expressions: First there are embarrassed winces, followed by uncomfortable cringes, and ending with an open mouth frozen in disbelief. The movie is an unmitigated disaster any way you look at it. Well-intentioned and manipulative in a Lifetime channel kind of way, I Am Sam recounts the story of a mentally retarded man's legal fight against the system to retain custody of his 7-year-old daughter, who is intellectually his equal. To win this battle, he must prove himself to be a fit single parent, just like Dustin Hoffman in Kramer vs. Kramer, a film that I Am Sam intentionally plagiarizes on more than one occasion. The credibility factor plummets from the start, in the early scenes depicting Sam single-handedly raising an infant with the help of a shut-in neighbor, who explains baby Lucy's feeding schedule to the befuddled father by using Nick at Nite programming to mark mealtime hours. Other than that obstacle, the difficulties of taking care of a toddler, regardless of the parent's mental capacities, are glossed over, leaving you to surmise that Sam is the embodiment of Dr. Spock know-how. As Lucy gets older, however, and develops the verbal skills and emotional poise of a 20-year old (as Lucy, newcomer Fanning creepily resembles JonBenet Ramsey, but without the make-up), she becomes more and more conflicted in her feelings for her dad, whom she loves but finds to be a social embarrassment. Soon, the local child protection services agency -- which apparently had no concerns about Lucy's well-being while she was a baby -- starts twirling its moustache and snatches Lucy from the arms of her loving father, who must solicit the aid of a high-strung, Type A attorney (Pfeiffer, at her worst) to bring his daughter home. Despite the potential of its subject matter, there are few genuine or honest moments in I Am Sam. When a social worker asks Lucy in an interview what she needs from her father, she deadpans, “All you need is love,” in keeping with the Beatles leitmotif used inexplicably in this movie. We're also told point-blank that simply knowing Sam can change even the most messed-up of lives, but we don't believe it for a second. (The scene in which Dern, who plays Lucy's suspicious foster mother, relents to the Tao of Sam is as bizarre as anything David Lynch could ever dream up.) Director and co-screenwriter Nelson not only undercuts the movie's intentions with such inane dialogue and contrivances, but deals it a death blow with her insistence on using a nervy, hand-held camera throughout. Is this supposed to be a sensitive film about what it takes to be a parent today or an episode of NYPD Blue? This frenetic technique is a mistake of grand proportions from which this film -- dare say, any film -- cannot recover. Between Nelson's jump cuts and zooms, and Penn's Method overkill in the title role, I am Sam will work your last nerve and then some. No argument here: It's a bad movie that only a parent could love. 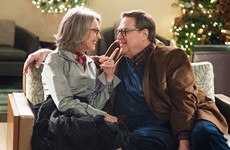