For those unfamiliar with tropical shrubberies, the lantana is a plant whose small, bright flowers conceal thorny, dense foliage underneath. It's also the central metaphor in this sophomore effort by Australian director Lawrence (who's laid low since the mixed reception and subsequent re-editing of his 1985 release, Bliss), symbolizing the secrets and lies that lurk beneath the placid surfaces of marriage and friendship. Beefy police detective Leon Zat (LaPaglia) shares a one-night stand with Jane (Blake), an acquaintance from the Latin dance class he perfunctorily takes with his wife, Sonja (Armstrong), when he isn't roughing up drug dealers or throwing back whiskey. Still striking in her middle age and dissatisfied, Sonja vents to her therapist, Valerie (Hershey), who's got problems of her own – grief over her daughter's murder, marriage to a cold-fish academic (Rush), and a patient (Phelps) who gleefully describes the havoc created by his affair with a married man. The plot picks up when Valerie disappears after having car trouble on a late-night trip home, and a clue leads the investigating officer (guess who?) to the lantana across the way from Jane's house. The plot makes the film sound like a thriller, but the story (from Andrew Bovell's stage play Speaking in Tongues) is firmly rooted in character drama, and Lawrence's direction lacks the economy necessary for a successful mystery yarn. The criticisms of Bliss apply here, as well: It's overlong, and several scenes meant to add nuance and define character are merely padding (such as a minor subplot involving drug use by the Zats' teenage son, which unsurprisingly provokes an angry response from Leon). Moreover, aside from the slow tracking shot into the titular thicket that opens the film (accompanied by eerie, hyperreal insect sounds from David Lynch's trick bag), the film is technically unsophisticated and visually flat. However, while viewers who expect a conventional suspense film may be disappointed in Lantana overall, it does succeed on a smaller, more intimate scale. There are no major revelations or sudden developments, but echoes and resonances within the relationships among the characters. Venturesome viewers should appreciate this lack of artifice – the avoidance of deus-ex-machina plot twists and the reliance upon tension generated by interpersonal situations that seem authentic. LaPaglia is a pleasant surprise, expressing his character's internal conflicts and stretching beyond the buffoonish tough-guy mode in which he's usually constrained. It's also nice to see such a credible look at midlife romances and mature marriages, with characters who remain sexy and vital in the second act of life. 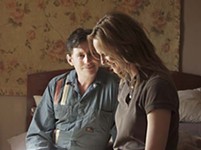 Jindabyne
The Australian director of Lantana returns to similar psychological terrain with this drama based on a Raymond Carver short story and starring the fantastic Laura Linney and Gabriel Byrne.