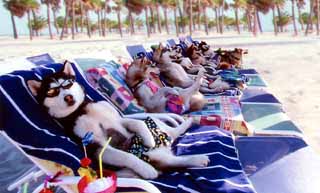 The marketing weasels over at Disney deserve to have their beady little eyes gouged out with flaming icicles for the fast one they've pulled on audiences with Snow Dogs. It's not that it's a bland and formulaic concoction tailor-made for the lower echelons of Blockbuster hell, which it is, but that the film's television spots make it out to be a north-of-the-border, canine version of the porcine classic Babe, which couldn't be further from the truth were it to feature an all-Hasidim cast cavorting in Jamaica. Mamzers! Doubtless those mousey powers that be reckoned to lure in fans of the talking-animal genre with a quick clip of two of the conversational huskies inserted into said ads, but the truth is, that particular gag falls under the rubrik of bizarre hallucination sequence and lasts for all of 30 seconds. (It should be noted that the bit in question also features Lt. Uhura herself, Nichelle Nichols, serving up some piping hot blue cheese cookies to Michael Bolton while Gooding Jr. lolls around in a pair of swim trunks so overwhelming in their sheer tastelessness that they almost certainly had something to do with Yves St. Laurent's recent departure.) To be fair, this is a film aimed at the pre-teen and tween sets, but for all its good intentions (of which, frankly, I am doubtful), the film's yappy moral lessons and whiney pandering just repels. Obvious when it could have been clever, and shrill when it had a shot at being charming, Snow Dogs is pre-packaged dog crap, a dumb movie made by dull-witted adults who clearly believe that just because some viewers currently reside at the lower end of the age spectrum, they don't deserve better. Talk to the paw, Goofy, because that isn't likely to cut it in the town that birthed Spy Kids. Gooding Jr., a rock-solid talent lodged in a barren wasteland of writing, plays the pleasant and respected Miami Beach dentist Ted, who is summoned one day to the far reaches of Alaska when his birth mother -- he's adopted, see -- leaves him her house and dog-sledding team. There he meets up with the father he never knew (Coburn, part crusty, part salty, all fun), acquaints himself with various and sundry oddball townsfolk (not too odd, though -- this isn't Northern Exposure by a long shot), and learns about life, love, and a dog named Demon. In between he topples over a cliff, almost freezes to death, and is nearly devoured by the ravenous husky team (with their big, big eyes) with whom he eventually, predictably bonds. But so what? Director Levant, who previously brought us the equally dogcentric Beethoven, mines similar territory here, albeit minus both Charles Grodin and a meaningful script. Does it even matter that Snow Dogs is plagued by freakish editing choices and blink-and-you'll-miss-'em stock background characters that wander blindly in and out of the storyline like so many penguins in a sandstorm? Not a jot. Here's counting down to Spy Kids 2, dogs or no dogs. 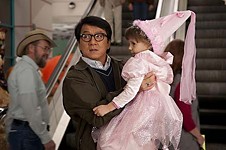 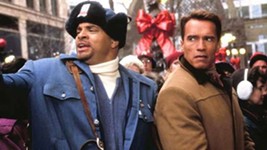