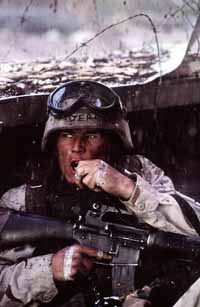 Ridley Scott's newest about the disastrous 1993 raid in Mogadishu, Somalia, that left 18 U.S. servicemen dead, many more wounded, and almost a thousand Somalians dead -- unspools like a dream, for both the audience and the characters onscreen: It has the inexorable, grinding inertia of a nightmare from which you can't wake. Bogged down in a slo-mo hell of bad vibes and worse luck, the characters, chipper raw recruits to a one, find themselves literally trapped in the kind of merciless and hyper-violent maelstrom of terror that for the rest of us, thank goodness, only visits us in our sweat-soaked overnights. For the American Special Forces and Rangers that entered Mogadishu on what was supposed to be a simple in-and-out misson to capture two of then-warlord Muhammad Farah Aidid's lieutenants, the nightmare just became worse and worse, moving from within clearly defined parameters to boundless anarchy, survival, and death. Scott, to his credit, takes this botched mission (the script was adapted by Ken Nolan from journalist Mark Bowden's bestselling book of the same name) and retools it as a lesson in military chaos theory and Murphy's Law: Each minor mistake mushrooms into something altogether more awful, and the tactical errors and just plain bad breaks mount and mutate like some hellish fractal. The plot is negligible, really. Scott gives us the basic facts about the mission, introduces a handful of U.S. Army Rangers and Delta Force with barely identifiable faces, quirks, and names, and tosses everything into one long, bloody firefight. There's McGregor's coffee-mad Company Clerk John Grimes, who as luck would have it finally gets to experience the action first-hand and almost immediately regrets it; Hartnett's Staff Sergeant Eversmann, the de facto audience-ringer we're most likely to identify with and the idealistic conscience (if you can call it that) of the film; Sizemore's growly Colonel McKnight; and a reliably crusty Sam Shepard as Major General William Garrison, who oversees the surreal firefight from the safety of an operations base miles away. The title of the film comes from the military's slang for a downed helicopter, but the event that sparks the American forces downfall occurs even before that, when a young Ranger (Bloom) accidentally misses the dangling rope attached to the side of one of the choppers hovering above the Mogadishu streets and falls some six stories to the ground, injuring himself severely and compromising the mission at its outset. (In actuality, the mission was considered an overall success since the two “targets” were indeed captured.) From there on out, however, this presumably simple half-hour operation mutates with viral speed and surety toward utter, unfathomable disorder, with a constantly fracturing chain of command and, eventually, an entire city of more than a million people massing against the embattled U.S. troops. Some viewers have commented on the generalism of the characters, choosing to see this as a mark of sub-par scripting, but I think that very facelessness and uncertainty -- who's that? what is he doing? -- works to the film's advantage. In the heat of battle and overwhelming violence, who really knows what the hell is going on? Certainly not the Major General, whose relayed-by-satellite-uplink directions to his Humvee-bound soldiers (“Turn left at the alley!” “Which alley?!”) as they try to rescue their downed comrades have the feel of too little, too late. Despite the visceral carnage in the film -- and how could you in good conscience not include it? -- Black Hawk Down is an amazingly well-shot picture, by Slavomir Idziak and Scott himself, whose always keen eye is working triple overtime here. Absolutely harrowing, shocking in its sudden revelatory immediacy, and very, very well done, Black Hawk Down is one of the best depictions of the outright lunacy inherent to battle I have ever seen.