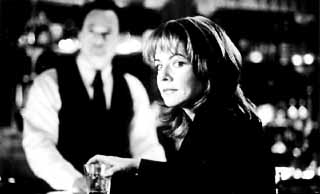 The Business of Strangers

Middle-aged executive Julie Styron (Channing) takes a limo to her business pitch, sporting Prada and pumps and firing off edgy retorts on her cell. Her administrative assistant Paula (Stiles) cabs over after a delayed flight, sporting bitch-streaked hair and an Ani DiFranco chest tattoo and schlepping armloads of audiovisual equipment. When their paths finally collide -- in the middle of the presentation, which tanks -- Julie fires Paula on the spot, then cools her heels with a Valium, a phone session with her therapist, and Dewar's with a cheesily slick headhunter named Nick (Weller). But it's then that the story of this character-driven psychodrama really begins, when all three characters spend the night in the same hotel. It's not giving too much away to say that the power dynamic between Julie and Paula most interests writer-director Stettner, or that it will shift radically over the course of the night. In what is basically a bravura two-woman show, issues of class, age, corporate politics, and gender unspool in tandem with the story's spare suspense plot. For the most part, Stettner is smart enough to set up his actors and get out of their way. Channing, in particular, amazes. Her brittle veneer gradually wears away to reveal patches of vulnerability that are more sympathetic than pathetic; though years of corporate sacrifice have taken their psychological toll, her character is tougher, smarter, and funnier -- not to mention sexier -- than the misogynistic businesswoman archetype of typical Hollywood fare: ball-buster on the outside, basket case on the inside. Later in the plot, as Stettner pours on the suspense, the nuances of Channing's performance keep the story from skidding into melodramatic thriller terrain. Stiles, a precocious and grave actress, acquits herself bravely here, but her character is more problematic. Stettner presents her as Julie's corporate flipside, an emotionally unavailable, sullen, and overeducated twentysomething who resents her dehumanizing “money job,” but as the plot snowballs, she seems increasingly pathological and less real. The ostensible motivation behind her mind games eventually evaporates -- a disappointing development, given the credible mix of curiosity, awe, and contempt (but not outright cruelty) with which Paula views Julie in the film's earlier scenes. The Business of Strangers is never uninteresting, to say the least; it's an absorbing film, even in its most flawed moments, and it's savvy and perceptive in its best moments. (At 83 minutes, it's also brisk and economical.) The film accurately captures the tastefully generic, white-noise environment of airport terminals and sterile business-class hotels, and indie cinematographer Teodoro Maniaci's compositions lack the stagebound, suffocating quality found in Neil LaBute's In the Company of Men, to which The Business of Strangers has inevitably been likened. But Stettner makes missteps in his storytelling that shortchange his characters and threaten to turn the film into a catfight. It's a possible rookie mistake, since this is his feature debut, based on his experiences working as a corporate office temp. Still, the film's performances shine despite the flaws in their setting. 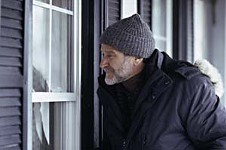 The Night Listener
This taut, wiry exercise in eerie bad vibes, about a writer-cum-radio personality and a disturbing teenage literary sensation, is emotionally dense but never fully takes flight.