Based on the antic stage play by George S. Kaufmann and Moss Hart, this Capra film earned Oscars for the film and the director. With her impeccable timing and idiosyncratic delivery, Jean Arthur plays a girl who must introduce her fiancé and his parents to her decidedly eccentric family. The pace is fast and furious and the scales tip quite forcefully on the side of living for the moment. Frank Capra in retrospect called this the "first hippie movie."

READ MORE
More You Can't Take It With You 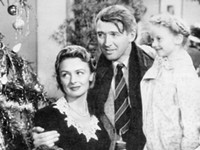 It's a Wonderful Life
This sentimental perennial is a holiday chestnut. A man learns that he's made a difference in the lives of others, and an angel gets its ...