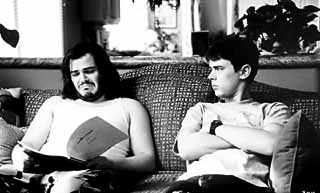 After he discovers that there's “more to life than extreme sports and trying to get laid,” teenage mensch Shaun Brumder (Hanks) hopes to escape Vista del Mar, California, and its seaside suburban trappings. Of particular concern is his family -- the simian, usually pantsless stoner brother (Black), the deranged, tippling mom (O'Hara), and the estranged father (Lithgow), a property developer with an explosive temper and a new trophy wife (Mann). Even his relentlessly positive girlfriend (Fisk), a compulsive animal rescuer with hippieish tendencies, gets on his nerves. But when a ditzy counselor (Tomlin) transposes his transcript with that of an imbecilic classmate, Shaun's hopes of getting into Stanford, his dream school, are tragically dashed. This MTV Films production is as lightweight as it sounds, treading gingerly on the line between farce and satire. Refreshingly, it's not as lowbrow or silly as your typical youth-oriented comedy of late. Consider that while a doddering, wheelchair-bound old man is repeatedly denied his medication and subjected to a handful of abuses, and portly comedian Black does vomit profusely in his first scene, the film really wants to be an old-fashioned coming-of-age story, not the slapstick laff riot suggested by its publicity. (One prominent segment from the trailer, in which an underwear-clad Black vamps in an admissions video, is absent from the film's final cut.) Given the production's pedigree, this doesn't surprise: Most of the creative team, including director Kasdan (son of Lawrence), are kinder, gentler Hollywoodians who previously collaborated on episodes of the acclaimed but short-lived TV dramedy Freaks and Geeks. Screenwriter Mike White penned and co-starred in the boundary-pushing Chuck & Buck. Another bonus is the bumper crop of more seasoned comic actors who pop up in supporting roles: Chevy Chase, Kevin Kline, Harold Ramis, a wonderfully deadpan Ben Stiller, and Jane Adams, who's a welcome addition to any cast. One could argue that they're all underused, but Kasdan's a generous director who gives his ensemble plenty of room to play off each other. Yet it's up to the younger actors -- particularly celebrity scions Hanks (son of Tom) and Fisk (daughter of Sissy Spacek and production designer Jack Fisk) -- to carry the story along. Hanks exhibits his father's goofball, blinky-eyed comic mannerisms and seems comfortable in the schlemiel niche, while Fisk has an earthy, soft-edged presence like her mother's, along with freckles to match. Still, Black manages to walk away with his scenes, even though his Falstaffian persona seems a bit toned down and more carefully balanced with the ensemble here. Overall, it's quite all right that Orange County isn't really that interested in skewering its eponymous milieu too ruthlessly, even though the opportunities for more pointed satire are ripe for the picking. To their credit, the filmmakers don't take cheap shots at their characters; even a spoiled, hellion toddler gets a chance at redemption in the third act. However, one wonders if, unfortunately, this light touch might not click with the film's target audience.