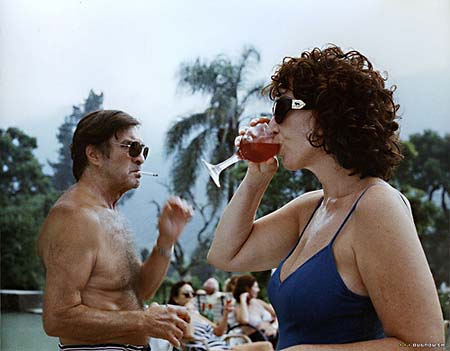 The publicity for this Argentine drama makes it sound like a domestic potboiler (with “tensions laid bare” that “erupt into violence”), but the reality of the film is something more uncommon -- and better. Writer-director Martel, who makes her feature debut with a handful of shorts and a documentary television series under her belt, is less interested in manufacturing suspense and more interested in farming the fetid social, cultural, and physical environment in which her characters dwell. The setting is a dilapidated country house, home to tippling, bourgeois harridan Mecha (Borges), her philandering and slack-jawed husband (Adjemian), and their assorted servants and children. Fifteen-year-old Momi (Bertolotto) is the only clear-headed member of the bunch; it is she who swoops in to rescue her mother after Mecha, wasted on iced cabernet, takes a bloody spill onto broken glass strewn about the house's phenomenally murky, never-cleaned swimming pool. With Mecha's freckled, saggy cleavage sutured and patched, the family receives an extended visit from relations in town -- José (Bordeu), their grown-up prodigal son, and a set of cousins mothered by practical, disdainful Tali (Moran). This scenario doesn't engender much in the way of traditional dramatics; though there's plenty of conflict, it simmers throughout strung-together scenes that reveal character rather than build to a climax. Martel is interested in unnerving the viewer with her characters' pathologies. Little cousin Luciano (Montagna) has a tooth growing out of his soft palate; another cousin (Diego Baenas) has a withered, blind eye, presumably from an accident sustained during a preferred pastime -- tromping around the nearby wilderness, firing off guns. Martel's camera also lingers uncomfortably around the cellulite and wrinkles of the elder sunbathers. Not a shot in the film is meant to be visually appealing -- to make this point, the only physically attractive character will be beaten to a bloody pulp -- and the sound design underscores the idea of decay, with flies buzzing inside the house and out. More significant, however, are the family's psychological dysfunctions: vanity, classism, openly racist attitudes expressed toward the domestic staff and locals, substance abuse, and suggestions of incest. Martel stops short of the outrageousness you'd find in a black comedy by the likes of Luis Buñuel, though her characters are approximately as despicable. Since she's more of a sociologist than a satirist, her method is flat and naturalistic; the children are nonprofessionals, and Bordeu is actually Borges' son. Subsequently, La Cienaga doesn't necessarily make for a crowdpleasing experience, though it is a provocative and uncomfortably authentic one.

The Headless Woman
Although the title makes this thoughtful Argentine movie sound like a bloody slasher film, Veró (Onetto) manages to keep her head attached to her body at all times. It's her wits that seem to be scattered after she hits something while driving, after which a seeming amnesia sets in, followed by the character's dislocation in her own skin.