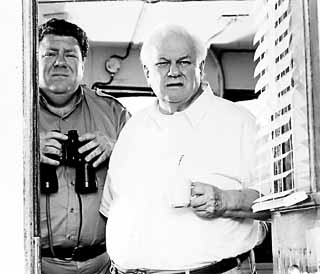 “So I saw this movie.” “You saw a movie?” “Do I fuckin' stutter?” “Hey hey, no need to be that way. Was it a good movie?” “Well I dunno. It was about a boat.” “A boat?” “Well, about these guys on this here boat, see.” “Okay, okay. So what kind of boat? Like a dingy kind of boat? Or one of them big ship-type boats?” “It was about a lake boat.” “A lake boat? What the fuck is a lake boat?” “`What the fuck is a lake boat?' Jesus, you're an idiot, you know that? Fuck me. It's a boat that goes on a lake, you moron. What the hell does it sound like?” “Okay, okay. So it's about a boat on a lake. That sounds just about as dull as a dingy in drydock, you ask me.” “Nah, that was the thing, see -- It wasn't too bad.” “See, these guys, they were on this boat and Charles Durning was the captain, and Robert Forster --” “Robert who?” “That guy from the flick about that black chick? Jackie something-or-other?” “Oh, yeah. Him. He's good.” “Fuckin'-A right he is. Anyway, like I was saying, there's these six, maybe seven guys on this boat, a steel freighter, actually, the Seaway Queen it's called, haulin' loads of steel up and down the Great Lakes from one side to the other. These guys just kinda don't have nothin' to do on the trip but sit and shoot the shit and bitch and moan and like that, you know? Real blowhards. There's this new guy, too, a kid, really, a grad student on summer vacation or somethin', and him and this Joe -- that's Forster -- really hit it off. The kid's name is Dale and --” “Who plays him?” “What the fuck do you care? Oh, alright. Tony Mamet is the actor's name.” “Mamet. Huh. That name sounds familiar.” “I know, I know. I'm gettin' to that.” “You're getting' to what?” “The name and why it sounds familiar.” “Oh, okay.” “So like I was saying, the Forster character, Joe, he tells the young kid Dale all about what it was like when he was Dale's age, and all the scary, weird shit that happened to him, and so does everyone else on board. Peter Falk's in it, too.” “Fuckin' Colombo!” “Right.” “Jesus. I ain't seen him since that stupid film about them angels.” “Whatever. Are you gonna listen to what I'm tellin' you, or maybe do you wanna flap your lips some more, 'cause I gotta tell ya, I'm getting' a nice breeze over here, pal.” “Yeah, yeah.” “So anyway, these guys, they just piss and moan about how good it used to be, or how bad, or what-the-fuck-ever, and this Dale guy, he ends up learnin' a lot about, like, life and all that.” “So what's up with that Mamet guy?” “Oh, yeah, right. The thing's written by David Mamet -- it's apparently his first fuckin' play, see?” “The guy from State and Main?” “That's the one.” “I didn't know he wrote plays.” “Jesus you're a fuckin' headcase, you know that? And the film was directed by Joe Mantegna, too.” “House of Games!” “Finally. A breakthrough.” “So is it any good?” “Lakeboat?” “That's what I'm askin' you.” “Jesus. What do I look like, Gene Siskel's ghost? Yeah. It's alright.” “Good enough for me.” “Hell. What isn't?” 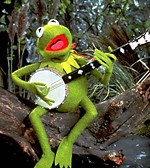 The Muppet Movie
The first Muppet feature showcases Kermit on the road to Hollywood. Dozens of movie-star cameos are included. ... 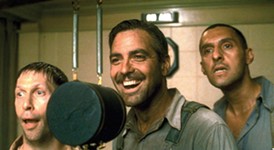 O Brother, Where Art Thou?
In this Depression-era Coen brothers film, a trio of chain-gang escapees seek a (possibly mythical) treasure while on the lam from a diabolical sheriff.