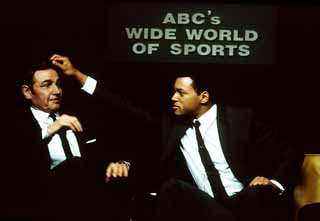 The best thing about Michael Mann's sprawling yet strangely non-encompassing biopic of Muhammad Ali's life is Jon Voight, who loses himself in the role of sportscaster Howard Cosell so thoroughly that I didn't even recognize the actor until after the credits had rolled. Ali is filled with thick and heavy vocal and physical mimicry, but it's the vocal impressions that stick with you the most. Voight has Cosell's odd cadence down pat; even the most mundane statement from this Cosell is freighted with import. And that hairpiece! Sam Donaldson could learn a thing or two from this guy. An then there's Will Smith, who does no disservice to the memory of the Greatest, who, it cannot be forgotten, had some mighty unique vocal rhythms of his own. Smith, layered in subtle facial prosthetics that, to a large degree, succeed in making him resemble Ali, clearly spent time with his subject; he walks like him, which is to say he doesn't walk so much as stride about with helium lifts in his shoes, with tensile springs in his toes. In the ring, he bobs and weaves and dances and generally keeps out of the way of the other guys' punches, just like Ali did, most of the time. You can't fault Smith's work here -- Ali may be one of our easiest heroes to parody, but he's damn near impossible to play without a trace of winking irony. Smith acquits himself admirably. Mann's film, which has some terrific moments, begins and ends with the two biggest bouts in the champ's life. When we are first brought on board, to the strains of a sweaty, fevered Sam Cooke, Ali is not yet a Muslim. Cassius Clay, the 22-year-old upstart, is going up against Sonny Liston, a punisher to Ali's redeemer; it's 1964. Ali wins, of course, and from there Mann and co-screenwriters Stephen J. Rivele, Christopher Wilkinson, and Eric Roth try to decode Ali's life by hitting the highlights only. Ali, the movie, comes at you like Ali the fighter, in a flurry of hard-thrown blows that land and ricochet and eventually leave you a little dizzy, a little confused. We get his dealings with Malcolm X, his fight against the draft, against the war, his conversion to the Muslim religion, his women troubles, and finally his battle against George Foreman in Zaire, the Rumble in the Jungle. But what we don't get is any real sense of what drove this living legend, what made him do -- really made him do -- what he did. There's a flashback early on that shows a very young Clay on board a bus with his father, moving to the segregated section in the back, staring at a newspaper account of a brutal lynching, but the moment, powerful though it is, does little to explain where Muhammad Ali came from. Who was this guy? You think you know, but I think you don't. The question is answered far more effectively in Leon Gast's excellent documentary When We Were Kings, which focuses solely on the Zaire story. Nevertheless Mann's film is beautiful to watch. Cinematogrpaher Emmanuel Lubezki employs a washed-out, harshly lit style that makes everything look vaguely menacing and hyper-real, which is complemented by Lisa Gerrard and Pieter Bourke's Africanized score, and some thrilling editing that leaves the audience as battered as poor Sonny Liston. It's not a TKO per se -- where did this will to power come from, anyway? -- but it is a helluva fight.