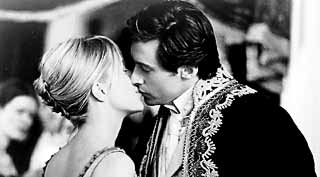 There's a telling moment in Kate & Leopold in which an artsy-fartsy film director whirls on our heroine, a careerist test marketer, and huffily declares, “You people with your tests, you are sucking the life out of American cinema!” He should know: The director is helmer Mangold, making a cameo, and he might as well be describing his own film. There's nothing terribly wrong with Kate & Leopold -- it's just an awfully conventional upmarket romantic comedy, complete with a climactic rooftop dinner, references to Breakfast at Tiffany's, moonstruck New York scenery, and wistful debate about whether it's preferable to “face up to reality” or “live a fairy tale.” Ryan is cute as a button, with careerwear from Barney's and a haircut so radically texturized that it looks like some kind of pasta, and suitor Jackman is so dashing that when it's time to write a love note, he siphons the ink from a ballpoint and whittles his own quill. There's an excitable, moony-eyed dog and wacky sidekicks for each co-star (Ryan has Lyonne, Jackman gets Schreiber, and Meyer switch-hits between the two). Fair enough, but don't expect many surprises in the mix, aside from the occasional moment of winking self-reflexivity. An English duke transplanted in Manhattan, circa 1876, Leopold (Jackman) is thrust into the 21st century when he innocently follows his mad-scientist descendant (Schreiber) through a time warp that opens and closes over the Brooklyn Bridge in accordance with the dictates of the screenplay. Even in 1876, the dashing duke is considered a mushy-headed romantic, preferring his wacky inventions (such as a prototypical elevator) to practical notions like marriage and advancing the family. With his jodhpurs, genteel manners, and mellifluous accent, Leopold makes even more of an impression in 2001, but sensible Kate (Ryan) is unmoved, vacillating between Leopold's overtures and an ill-advised dalliance with her slimy boss (Whitford). It's a connect-the-dots kind of plot. The time-travel conceit isn't even as far-out as it sounds; it's merely a perfunctorily handled suspense device that complicates the inevitable, aside from certain moments in which Schreiber, clearly enjoying himself, chews his wild-eyed dialogue about “a crack in the fabric of time.” The actors are all fine, though Lyonne is underused, and Jackman is probably charming enough to carry the movie. He remains dignified throughout the requisite fish-out-of-water sight gags (an ongoing battle with an electric toaster), and the film's best moments rip savvily on his audience-pleasing hunkiness. (Kate recruits him as the studmuffin spokesman for a line of diet butter, banking on him as an object of feminine wish fulfillment.) But the in-jokes seem almost like a defensive posture from Mangold, a prestige director who co-wrote the script with Steven Rogers, a specialist in the feel-good formula (Hope Floats and Stepmom). It's really not wrong to hope for more from the creator of more complex, character-driven fare (such as Heavy and Cop Land).