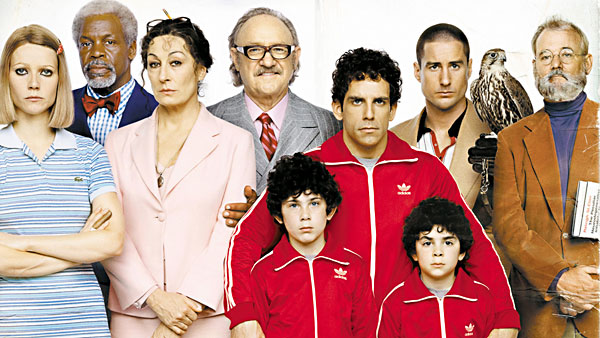 “Being a Tenenbaum isn't as easy as it used to be,” observes a member of the brood in this grand family saga whose literary aspirations and resonant title seem to purposely thrust viewers into the mindset of The Magnificent Ambersons. Wes Anderson's third directorial outing (following the unlikely breakthrough success of Bottle Rocket and the much-heralded comic stylings of Rushmore) shows this maverick filmmaker to be expanding his emotional palette and dramatic range while at the same time continuing to use the medium of film as a tool in his individual growth process. As Anderson spins his novelistic tale about the Tenenbaum family -- a family composed of three child prodigies, their errant father Royal (Hackman), and their earth mother Etheline (Huston) -- the director's presence is palpable amid the broken dreams and shattered relationships experienced by his story's fictional characters. Although the story of The Royal Tenenbaums is original (co-authored with Anderson's longtime writing partner Owen Wilson, who also co-stars in the movie), it is fashioned like an old-time storybook, with cutaways to pages of a book turning as it is read aloud by an offscreen narrator (Baldwin). Orson Welles had Booth Tarkington as the literary source for Ambersons; Anderson and Wilson's story is original, but anyone familiar with J.D. Salinger's Glass family or back issues of The New Yorker will recognize their characters' reflections in The Royal Tenenbaums. The movie is a valentine to the New York City of the imagination, a place filled with precocious children, colorful adults, big, fabulous brownstones, and ever-handy gypsy cabs. Most of all, though, the city is filled with potential -- something that peaked early for the Tenenbaum children, who all feel that their early brilliance has been erased by “failure, betrayal, and disaster,” a turn of events they blame largely on their father's departure more than two decades before. A scoundrel insensitive to his children's feelings, Royal is nevertheless filled with a certain joie de vivre that is wholly lacking in his offspring. As the story begins, Royal decides to wheedle his way back into the lives of his family (he and Etheline have never divorced) because he has been evicted from his current abode. Coincidentally, all three Tenenbaum children have temporarily, and unhappily, returned to the family homestead. These grown geniuses include Chas (Stiller), who as a child bred Dalmatian mice and had a preternatural understanding of international finance; championship tennis player Richie (Luke Wilson), who had a public, on-court breakdown after winning several national competitions; and Margot (Paltrow), an adopted child who was an award-winning playwright at the age of 9. They have all sprouted into unhappy adults. Meanwhile, Etheline has discovered a career in urban anthropology and is dating her courtly accountant (Glover). Also flitting in and out of the family abode is neighbor Eli Cash (Owen Wilson), who has developed into a drug-addled writer of popular cowboy fiction; Margot's neglected husband Raleigh St. Clair (a very underused Murray, especially considering his leading stature in Rushmore); and house man and conspirator Pagoda (Pallana), who steals almost every scene he's in. Anderson carefully structures the characters and the scenes, selecting attributes and costumes for them with extreme rigor. His compositions are all picture-perfect, and the music score shrewdly complements the action. The details make it all memorable, as do the performances. This is among the best ensemble work of the year, and some of the best work of Hackman and Huston's careers. At times, the film becomes dangerously precious, as if Anderson also fears the malaise that besets the Tenenbaum clan and throws in absolutely everything he's got at his artistic disposal in order to keep the doldrums at bay. In the end, though, he has created a big generational saga that woos the audience with its humor, spirit, style, and ability. Genius here is an evolutionary thing.