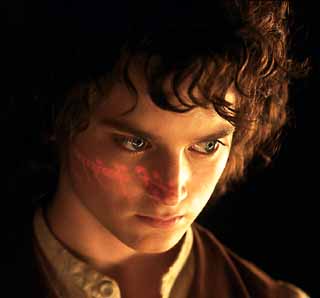 Frankly, this is one of those times when a reviewer knows going in that little, if any, of what he has to say about a particular film will have any impact on readers' decision to see the movie. Good or bad, Lord of the Rings: The Fellowship of the Ring, the first in Kiwi director Jackson's Tolkien trilogy (the other two films will be released on successive Christmases), is going to bring them in like nothing since George Lucas' last Jedi outing; J.R.R. Tolkien's sprawling novels are as much a part of pop culture mythology as anything else I can think of. So it comes as a tremendous relief to fans of Tolkien (I count myself among them) that Jackson has not only stayed true to the spirit and complex fantastical logistics of the novels in his film, but also managed to create a breathtaking and beautiful work of art of his own. Lord of the Rings works on at least a half-dozen different levels, from the casting to the score (by Howard Shore, with songs by Enya), and from the special effects and computer-generated imaging to Andrew Lesnie's cinematography, which manages to both capture the inherent hugeness of the storyline while simultaneously focusing on the film's individual characters. The story, simply put, is of the classic quest variety, albeit in reverse: The hobbit Frodo Baggins (Wood) and eight friends, among them Rhys-Davies' dwarf Gimli, Mortensen's human fighter Aragorn, McKellen's sage wizard Gandalf, and a host of other hobbits, elves, and assorted Middle-earth races, must destroy the dreaded Ring of Sauron (which threatens the safety of the entire world, natch) by casting it into the fiery belly of Mount Doom, where it was forged long ago. On the way, the unlikely fellowship encounters all manner of difficulties posed by the renegade wizard Sauroman (the legendary British actor Christopher Lee in his finest performance in ages), demonic Balrogs, legions of scaly Orcs, and the occasional bout of in-fighting among their own numbers. More than anything else, I think Lord of the Rings captures the same fantastic flourishes that Harry Potter aimed for, and failed to achieve. From the opening prologue, which handily dispenses the entire story of The Hobbit in 15 minutes or so before moving on to a placid, idyllic shot of young Frodo idly reading a book in the shade of a tree in the midst of the Shire, Jackson has you in thrall to the story – and to the film he has made from it. The battle scenes, of which there are several, are brilliantly shot. There's none of the whipcord camera theatrics and inexplicable editing choices that marred Harry Potter's bewildering Quidditch match. Your head spins less than the characters', and it's relatively easy to keep mental score as the Fellowship of Nine engage the Black Riders and whomever else is out to get them at any given moment. This is high fantasy of the best kind. If you've managed to elude Tolkien's siren call over the years, this is your chance to catch up and fall for it once and for all. The film makes sense on its own terms, and there's no reason for Ring virgins to rush out and hurriedly read the novels before attempting the film. Minor quibbles – CGI battles that look like, well, CGI battles, and so on – are almost beside the point. Jackson has accomplished what many thought undoable. He's brought Tolkien's florid majesty to the screen intact. All this and Cate Blanchett, too. Wonders never cease.