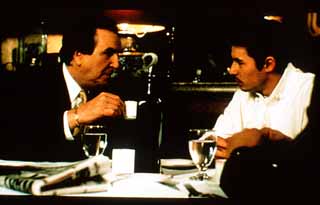 It's hard to resist those jejune food metaphors when describing Dinner Rush, a pleasant and often surprising ensemble dramedy set almost entirely within the walls of a busy, fashionable Tribeca trattoria on a spectacularly busy Tuesday night. But the story and its setting are much like a meal of comfort food at a cozy, welcoming neighborhood eatery, so the comparison sticks. Temperamental chef Udo (Ballerini) runs the kitchen like a slave galley, browbeating traditionalist sous chef Duncan (Acevedo) and the rest of the cooks while his nouvelle cuisine and superstar attitude curry favor with the glitterati. But his father, Louis (Aiello), owns the place, holding court in the dining room and running a modest bookmaking operation on the side. The balance of power shifts when two Mafiosi from Queens (McGlone and Alex Corrado) attempt to muscle in on the restaurant, dropping in for a meal after executing Louis' partner (Frank Bongiorno). While Duncan, already $6,500 in the hole to the two heavies, makes another bad bet, feisty waitress Marti (Phoenix) works the table of a demanding art snob (Margolis, who is perfect) and his hangers-on. An imperious food critic (Bernhard) demands a choice table and a surprise from the kitchen, and an average Joe warming a barstool (Corbett) wonders aloud, “When did eating dinner become a Broadway show?” While the various subplots are handled deftly, the scenarios themselves aren't exactly the freshest catch of the day; the conflicts are familiar, as is the nostalgic Mafia milieu. Screenwriters Brian Kalata and Rick Shaughnessy are first-timers with backgrounds in advertising, which might explain why they take so few risks with storytelling. Cynics will furthermore note that director Giraldi, a commercial and music-video impresario from back in the day (Pat Benatar's “Love Is a Battlefield”), has set the action inside an actual eatery which he co-owns, the Gigino Trattoria and Take-Away. (For would-be patrons who are lost, the film contains a number of exterior establishing shots with prominent street signs, and there's an awkward bit of dialogue in which Phoenix carefully articulates the name of the signature dessert.) That said, the film's charm and warmth really remain undiminished, and Giraldi's fast-paced shooting and editing style nicely captures the energy of a busy night. The evening starts off, for example, with an accomplished montage of dinner-rush preparations, with contrapuntal sound used to tie together the events in the kitchen, the bar, and the dining room. The rhythm of these scenes keeps the film moving at a brisk pace, so it doesn't bog down in the complications of the narrative. Finally, the twist ending is a nice garnish on the plate, even if the producers telescope it with the promotional tagline. 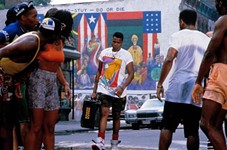