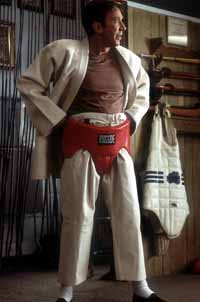 It wouldn't be the holiday film season without the release of at least one bland, by-the-book comedy sandwiched in between the serious Oscar fare and the three-hour spectacles. This year's entry in this dubious category is Joe Somebody, a fable of sorts about a nebbish named Joe Scheffer, who suddenly becomes visible to the world when he stands up for himself by challenging the bully who punched him to a rematch. There's something faintly Capra-esque about this underdog scenario that might have made for a quirky social satire had the film not been tailored from start to finish as a Christmas vehicle for Tim Allen. Don't get me wrong: Allen's father-doesn't-know-best gig in the long-running television series Home Improvement was better than what you see in most sitcoms of the same genre. Like Roseanne Conner in her prime, his TV character's struggle to live up to his own expectations for himself, as both husband and parent, was genuinely touching at times. On the big screen, however, Allen loses this intimacy with his audience; to be charitable, his presence is nondescript and lackluster in the movies. That may be why he at least makes a small dent of an impression in the early scenes in Joe Somebody, when his character is intended to be, well, nondescript and lackluster. Although not a terribly expressive actor, Allen conveys in these scenes, to some degree, the feeling of self-defeat that pervades Joe's everyday existence. But once the character's orchestrated rise begins, Allen's acting shifts to the persona mode and “Joe Somebody” can't turn back. As the film progresses, it becomes more and more cynical in its effort to please, right up to the climactic rematch, which appropriately enough, takes place in a schoolyard. The movie's message professes to ostensibly be about the need to be yourself, it's what inside that counts, blah, blah, blah, and yet, the film gets all of its energy and kick from the scenes in which Joe is acting completely contrary to those truisms. Occasionally, Joe Somebody gets you to chuckle, particularly when it jabs pharmaceutical advertising (the recited litany of side effects at the end of every prescription drug commercial is a running joke here) and corporate human resources mumbo jumbo. But, on the whole, it's not very funny, which is in keeping with the every other bland, by-the-book comedy sandwiched in between the serious Oscar fare and the three-hour spectacles in holiday seasons past. In many respects, Joe Somebody and its ilk are like that predictable pair of boxer shorts or that inevitable housecoat that you receive every year for Christmas from someone in your family. For better or worse, it wouldn't be the holidays without them. 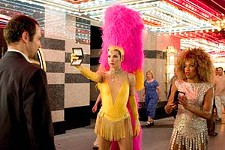 Miss Congeniality 2: Armed and Fabulous
No medals will be awarded for this Sandra Bullock follow-up, although the actress proves herself an ever-game comic actress. 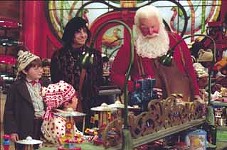 The Santa Clause
When Santa falls off his roof, a man forgets to read the fine print before signing on as his substitute.