Giddy holiday fluff with the emotional consistency of meringue, La Bûche is French filmmaking by way of the Hollywood romance. A comedic look at a dysfunctional French brood and the various collisions and bruised egos that result when they come together for the holidays, this is likely to come and go in the theatre without much of anyone noticing; were it not for the excellent, spot-on performances peppered throughout the story, I'd have likely dismissed it entirely. That's unfair, I suppose, but the fact remains that this sort of Home for the Holidays fare is hardly new, and most of us get enough of it in real life, at least once a year, to do without a cinematic update like this. Thompson, who's best known for penning the equally lightweight comedy Cousin, Cousine in 1975, makes her directorial debut here in presumably familiar surroundings (her son Jean-Pierre is also on board in the “mysterious-yet-handsome-stranger” role), and for all its featherweight obviousness, the film has a real drive at its core. Beginning on “21 Decembre,” La Bûche tracks the day leading up to Christmas as the recently widowed Yvette (Fabian) calls her three grown daughters home for both a funeral and their annual holiday feast. There's Louba (Azema), at 42 the eldest of the children, who has just discovered she's pregnant by her married, balding lover (Darroussin, resembling a more corpulent Wallace Shawn); middle child Sonia (Béart), whose life revolves around her family and homemaking; and youngest daughter Milla (Gainsbourg), a motorcycle-riding computer programmer with a cynical streak and no one with whom to spend Christmas Eve other than her family. Added to this classic French farce mix is Yvette's ex-husband Stanislas (Rich), with whom Louba lives and has been caring for over the past two years; the aforementioned mysterious stranger; and a host of improbable events. That it never quite jells is due more to the roundabout nature of the script than the players, all of whom resonate a genuine familial irritation at having been called home for not only the holidays -- bad enough -- but to a funeral as well. They can't all be bothered, but looking at Milla's face as she is blithely turned down for a Yuletide rendezvous you can see that she, at least, would like to (be bothered). As La Bûche moves along, Thompson reveals more and more dysfunction within her characters. There's something about seeing all these melodramatic plot turns -- more common to us as the linchpins of daytime soaps and primetime Fox fare -- enacted in a precious, precocious French family that adds a touch of surreality to the proceedings. It makes you want to head off to Paris to see if things are really as badly muddled there as here, and then return to the relative safety of your own brood as soon as you can. Not likely to win any hearts or minds this holiday season, La Bûche finally scores points by virtue of its inoffensiveness: Relax, pour a cuppa nog, and watch somebody else muck up the holidays for once. 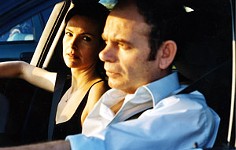 Red Lights
Leave it to the French to fashion an anguished psychological thriller that, in its last moments, also turns out to be a tender love story.