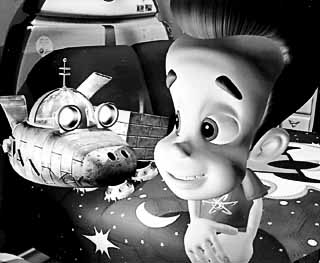 From start to finish, Jimmy Neutron: Boy Genius delivers an amiable if routine 90 minutes for little tykes with big imaginations. As the title puts forth, Jimmy's a boy genius, living in sometime-in-the-future suburban Retroville with his clueless but caring parents and a robot-dog named Goddard. But Jimmy's larger-than-life creations, like a toaster-satellite launched into space to contact an extra terrestrial, can also get his pint-sized person into trouble. When some sluglike baddie aliens come across the aforementioned toaster, they swoop down to Earth and make off with Jimmy's parents (along with his classmates' parents as well). After the fun and games of no mom and pop wear off -- and boy, isn't it all fun and games until somebody gets an ow-ie and there's no mommy to make it better? -- Jimmy does what any self-respecting boy genius would do, and that's set out to save the world. (And a stylish world at that: Much of the film's appeal, especially to adults, comes from the retro-futuristic eye candy.) While the premise -- that of mom and dad as potential alien-munchies -- might be a little too menacing for younger kids, needless to say, good does prevail. The animation is perhaps a bit below the bar, what with the ever-skyrocketing standards set by the likes of Monsters, Inc. and Shrek, but discriminating kiddies should applaud the fact that Neutron is indie-based: Creator John A. Davis first breathed life into Jimmy in a lo-fi short called "Runaway Rocket Boy" in the early Nineties; only later did Nickelodeon step in to supply the big bucks and big animation team. Neutron covers all the requisite life-lesson bases -- think big, believe in yourself, parents really do know best; although one might balk at a few of the characterizations (the only black girl in a prominent part is never without her hip-hop-blasting headphones; Jimmy's best friend, Carl Wheezer, is fat and asthmatic, which might give impressionable kiddies the idea that Jimmy must be a hero for befriending such a slob). Still, minor offenses from a minor, but genial, holiday treat -- and bonus points for evening out the Top 40 soundtrack with the Ramones and the Go-Go's. Might as well start 'em early. 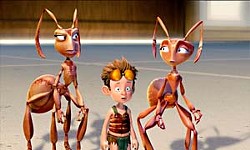 The Ant Bully
Childhood's fascination with all things small and squirmy makes this story of a boy who becomes an ant a pleasant, if undernourished, tale. 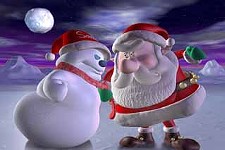