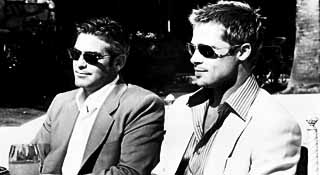 A clever, ingratiating, and altogether inoffensive update of the 1960 Rat Packer of the same name, Ocean's Eleven may be exactly what audiences are seeking right now. Heavy on style and boasting the kind of across-the-board ensemble cast that rivals It's a Mad, Mad, Mad, Mad World for sheer star power, this is Soderbergh flexing his pure-entertainment muscles, creating a heady, goofy zone of straight artifice and sporadic comedy. It's hard to think of anything else in theatres this season likely to serve as better a cinematic tonic for those jangled geopolitical nerves than this sprawling Las Vegas heist romp. Where else are you going to see old-school titans Carl Reiner and Elliott Gould in a pair of their finest performances of the past two decades? Clooney, oozing enough suave to merit a mob-job, plays Danny Ocean, a recently paroled con-man who brings together a crew of 11 rakish scoundrels to rob not one, but three, of Sin City's heaviest-hitting casinos in one daring robbery (times being what they are, this is down by two from Sinatra's original turn as Ocean). With partner Dusty Ryan (Pitt) in tow, and rival casino boss Ruben Tischkoff (Gould) on board to provide the necessary capital, Ocean recruits the other eight, among them Cockney demolitions expert Roscoe “Basher” Means (Cheadle), pickpocket scam-artisan Linus Caldwell (Damon), tech geek Livingston (Jemison), inside man Frank (Mac), and Reiner's old pro Saul Bloom. Affleck and Caan's Malloy Brothers opt in for some light comedy and grunt work; newcomer Qin is a contortionist “grease man.” Garcia's chilly Tony Benedict is the gang's ultimate mark, who not coincidentally happens to be making time with Ocean's ex-wife Tess (Roberts). Entering into the logistical schema of Ocean's Eleven's convoluted plot mechanics here is unnecessary; suffice to say that Ted Griffin's script keeps the heist in the foreground and lets the performers jostle for position around it in what amounts to a heavily choreographed ballet of misdirection and rampant charm. Which, come to think of it, sums up the whole affair: Ocean's Eleven is nothing if not charming, from the smartass panache and equitable banter that flows between Pitt and Clooney, to Reiner's lugubrious oldtimer, to Soderbergh's somewhat toned-down cineaste flair-ups. Alongside Scorsese and Wes Anderson, Soderbergh is unquestionably one of the smartest American directors to inhabit the current Hollywood scene. Even his lightest films -- chief among them is this one -- rise to the top like a forced ace; he's one of the few popular filmmakers working whose style is instantly recognizable, and he brings a palpable sense of brainy fun to the table (along with a growing stable of co-conspirators, from composer/DJ David Holmes to editor Stephen Mirrione and production designer Philip Messina). Fun: That's key to Soderbergh's crackling game. It radiates from the smirky, hi-watt faces of Ocean's star players like light from a Klieg. It's a kick, it's a gas, and it gives the Rat Pack itself a run for its money.