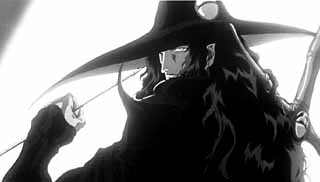 Bloodlust cuts right to the bloody heart of what's great about Japanese animation: shockingly beautiful images nested inside an entertaining storyline, girded on all sides by a heady mix of action, romance, and outright violence. All this and vampires, too! With its exuberant disregard for the niceties of the Disney/Pixar set, anime will always be the odds-on favorite among fans of cartoons for grownups; you can bet that if there's a talking mouse anywhere on screen in a Japanination film, chances are the little scamp is carrying plague. The fetishistic abandon of the style is brought to the fore in this recent sequel to 1985's Vampire Hunter D. Both films are drawn from the manga work of author Hideyuki Kikuchi, which center on the half-human, half-vampire “Dunpeal,”, aka D (voiced stateside by Andrew Philpot, late of The Practice), a wraithlike vampire-slayer-for-hire prone to steely glances and noirish ensembles that put you in mind of Clint Eastwood's Man With No Name (D even sports some vaguely Western headgear, albeit more 10-ounce than 10-gallon). Astride his trusty, black-as-coal steed and with a massive throat-ripper blade slung across his back, he's like a retro-gothic Yojimbo character out for blood in more ways than one. In Bloodlust, D is hired by the nobleman father of a young woman who has been kidnapped by the vampiric swell Meier Link (Rafter Lee). The old man has also secured the services of the Markus Brothers, a mercenary gang who initially try to best D at his own game but (not surprisingly) later end up tag-teaming with the semi-undead swordswinger. There's also an ancient vampiric countess, an entire civilization of bizarre, Boschian creatures bent on killing any mortals in sight, and lest we forget, “Left Hand” (McShane), D's, uh, left hand, which fires off snappy comebacks and generally acts as the demi-vampire's irascible partner. Director Kawajiri is the man behind the popular anime films Lensman and Neo-Tokyo; he knows his craft from the viscera out, and Bloodlust unequivocally looks like the proverbial million bucks. The animation style falls somewhere between a Peter Murphy dreamscape and a bizarre medieval-futurist mélange of flashing laser pistols and armored stallions snorting gore, but any way you slice it it's still great fun. (My only serious quibble was with the overlong running time, which could easily have been trimmed by a quarter-hour.) As usual with anime features, just because it's animated doesn't mean it's for kids; heads roll and blood spurts, so know that going in, mom and dad. For the older crowd, though, it's gory and gorgeous bliss.