For his fourth feature, quadruple threat Burns (who writes, directs, stars, and produces) lightens up. This wispy, cosmopolitan slice-of-life is fueled by hand-held camerawork, montage, jump cuts, and “on-the-street” interviews with his characters that seem improvisational and are appealing on their own, though the conceit is patchily integrated into the film as a whole. The gossamer storyline (really, a collection of scenes) follows six characters on a romantic roundelay of meet-cutes, cheating, lying, self-deception, and second-guessing -- familiar terrain for viewers of Burns' She's the One and The Brothers McMullen. But instead of the working-class outer boroughs, Burns lands his characters in stylish Manhattan, soundtracking their escapades with Cake and Woody Allen jazz (Stan Getz and Django Reinhardt) instead of the Boss. Griffin (Tucci) is a loathsome, philandering dentist, keeping toothsome chippie Ashley (Murphy) on the side while deceiving wife Annie (Graham), a prissy realtor. Annie meets and eventually flirts with client Tommy (Burns), a blandly handsome television producer recently split from his girlfriend (Thorne) and their tasteful apartment, and Tommy begins haltingly courting Maria (Dawson), a no-bullshit schoolteacher from Staten Island. Meanwhile, Maria's cloying ex-husband Ben (Krumholtz) begs for a second chance -- until he meets Ashley in the coffeeshop where she waits tables. The plot is less farcical and energetic than it sounds, leaving time for the characters to ruminate at length about their choices, in the interviews and in scenes driven by self-revelatory conversation. As a storyteller, Burns is too heavily invested in dialogue for the purposes of explication, though it seems natural for these characters, immersed in the culture of psychotherapy and urban vanity, to prattle on as they do. However, cinematographer Frank Prinzi doesn't help matters by using violent swish pans in scenes of verbal conflict, overstating the mood considerably. And while there's not a bad performance in the ensemble, the characters are still thinly drawn: The men are commitment-phobic, spineless, and manipulative while the women are soft-headed, flyweight romantics (particularly Graham, even though she's been set to Early Diane Keaton and given wire-rimmed glasses and a Yale crew sweatshirt). Dawson is a notable exception; she's a remarkable, earthy presence on camera, and she invests her character with a certain gravitas that keeps the film anchored. Krumholtz, another young actor, is equally natural, and his romance with Murphy is surprisingly sweet. But Farina, as Tommy's scumbag boss, walks away with the movie, thanks to his larger-than-life presence and choice bits of salty dialogue (women “love it when the balls smell nice”). There's just not much of a movie for him to walk away with. On a trivial note, the World Trade Center towers co-starred prominently in Burns' scenes, causing the film's release date to be pushed back. 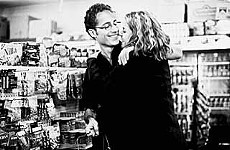 Whipped
Whipped is very much a man's movie. Not just any man, but the frat boy, “lay-'em-and-leave-'em” type man whose vocabulary doesn't include big words like ...