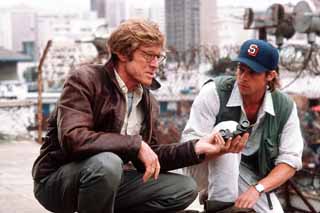 Ponderous and bulky, swaddled in an aura of flimsy import, Spy Game is the first Tony Scott film I've actively disliked on an almost visceral level. There's a specific point in the film that I can look to and say, for me, “here is where the crap began.” It's during a Vietnam flashback, narrated by Redford, and the sequence is cued by the scungy hesher buzz of Joe Walsh's “Rocky Mountain Way.' Coupled with a sweeping overhead chopper shot and plenty of Scott's ought-to-be-patented billowing choruses of smoke, dust, and airborne debris, it's meant to slide the audience back along the temporal slipstream to those awful waning days of the war and into these characters' mindsets. As it is, the sequence merely triggers the audience's collective bullshit detector: Surely a less-hammy musical cue would have been more effective? Not for Scott, who ratchets up the already apparent to the point of boorishness. And it's not an isolated incident, either. Spy Game is told mainly in flashbacks, which is its chief problem. The story, by writer Michael Frost Beckner (Cutthroat Island), is repeatedly and willfully stopped cold every time graying CIA operative Nathan Muir (Redford) launches into an explanation of the actions of his protégé Tom Bishop (Pitt), who, as the film begins, is taken prisoner by the Chinese during a bungled rescue operation. As he relates the star-spangled career arc of the imprisoned Bishop to his bosses, hoping to buy some time before the missing spook is either executed by his captors or ignored into oblivion by the scowling Langley suits, Muir rambles on about the business of being a spy, with sidetracks into his own experiences playing the spy game (“And make no mistake,” he tells Bishop during one of those omnipresent flashbacks, “It is a game”) and various droll bon mots about the biz in general. Frankly, it's all a bit of a bore and leaves you wondering why a pro like John Le Carré wasn't brought on board to sort through the crud. Some of the stories contained here would have made fine films on their own -- a lengthy segment having to do with Beirut circa 1984 and a terrorist-funding sheik is particularly well done (and well shot by director of photography Daniel Mindel, who also shot Scott's Enemy of the State) -- but it's surrounded on all sides by the cinematic equivalent of stale popcorn and, ultimately, stands alone. Spy Game takes itself too seriously by half. The grinding machinations of the Shop and the interplay between Muir and Bishop, forever seen in hindsight, are as dull as the plating on a Sig-Sauer P220, and far less likely to keep you on the edge of your seat, where you belong. Scott brings his terminal bluster to every scene, too, with jittery hand-held cameras, revolving POV shots, and enough hyperkinetic editing to make your head spin, and not in a good way, either. And unlike that renowned firearm manufacturer's legendary combat sidearms, the end result of Spy Game is a dead-chamber misfire, a hollowpoint dud.