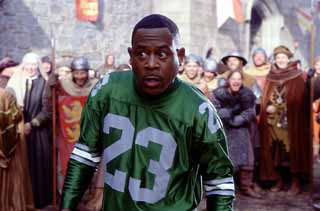 After the inexplicable popular success of Big Momma's House, no doubt Martin Lawrence and his handlers were searching for some sort of follow-up that would broaden the abrasive comic's range. Something literary yet wacky, something that would allow Lawrence the chance to flex those comic muscles. The result of this is Black Knight, which ransacks Mark Twain's A Connecticut Yankee in King Arthur's Court in search of urban yucks and comes up lacking in almost every department. Twain's rep remains unsullied by Lawrence's abrasive schtick, though hopefully students won't end up flocking to Black Knight in lieu of reading the source material. Lawrence is Jamal Walker, a conceited wannabe player who passes the days working at a medieval theme park that's seen better days. The script by Big Momma scribe Darryl Quarles wastes no time in setting up Jamal's character arc. When the theme park is threatened by neighboring competition, he plans to take his best pal and get while the proverbial getting is good. His plans are scuttled, however, when a bizarre (and bizarrely contrived) accident lands him in the park's scum-encrusted moat, and from there to -- where else? -- the Middle Ages. How and why this happens revolves around some of the vaguest plot machinations I've ever seen. There's something about an amulet which may or may not be magical (it's never fully explained, though to be fair, it really doesn't matter one way or the other), but once Jamal is thrust through the time barrier the film coasts through all its obvious gags and fish-out-of-water hijinks that were old when Twain first penned them. It's not comedy without a love interest, and Jamal quickly falls head over Nikes with spunky chambermaid Victoria (Thomason), who's involved in a plot to overthrow the foul King Leo (Cooper, looking like a bored Charles Laughton beneath a pasteboard crown). Once aligned with the rebel plot, and desperate to get it on with his new flame, Jamal is forced to come to grips with his own self-centered nature and get over himself, already. There's also a lengthy subplot involving a legendary “black knight” whose arrival is fated to turn the tide of King Leo's intemperate rule, another ongoing gag involving Jamal's nonexistent equestrian skills, and a wealth of urban slang slung at the poor medievals. Fans of Sam Raimi's Army of Darkness will recognize a number of lifts from that film, which, when you come right down to it, provided a much more realistic depiction of medieval drudgery than anything to be found here. Lawrence can be a genuinely engaging comic when he wants to be -- his stand-up work in You So Crazy proved that -- but here he's just idling through a cheap knockoff that doesn't even bother to make sense. There's precious little to like about the witless and decidedly tedious Black Knight other than the fact that it's unlikely to generate a sequel. 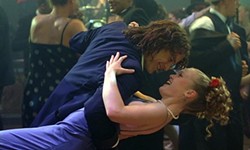 10 Things I Hate About You
This updated version of Shakespeare's The Taming of the Shrew provides a sharp examination of teen dating rituals.